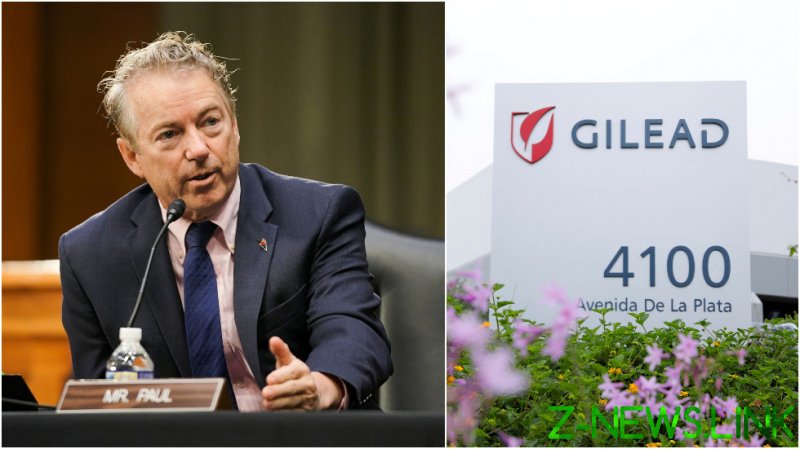 The Kentucky Republican acknowledged the stock buy on Wednesday in a Senate filing, the Washington Post reported, noting that Paul missed the mandatory 45-day deadline to disclose such trades by around 16 months.

According to the filing, the senator’s wife invested between $1,000 and $15,000 in the stock of Gilead Sciences, the maker of remdesivir, on February 26, 2020 – just weeks after Covid-19 made its debut on the world stage and before the virus was formally declared a pandemic by the World Health Organization (WHO).

Two days prior to the stock purchase, the WHO’s assistant director general said remdesivir “may have real efficacy” against Covid-19. While the drug was used to treat then-President Donald Trump when he came down with the virus in October 2020, the health body later concluded it wasn’t as effective as it first appeared.

A spokeswoman for Paul, Kelsey Cooper, said the senator had filled out a reporting form for the purchase last year, as is required under the STOCK Act, a 2012 law designed to stop insider trading among lawmakers. However, she added that Paul only recently learned that the form was never submitted, after which he quickly sought guidance from the Senate Ethics Committee and filed a supplemental report on Wednesday. It is unclear why the initial document was not sent.

While the spokeswoman also pointed out that Paul’s wife, Kelley lost money on her investment, which was made with her own earnings, critics of the GOP senator, as well as legal experts cited by the Post, argued that the buy may have constituted illegal insider trading, using information Paul could only glean from his role as a US senator.

Despite the small size of the trade, it “may have exploited knowledge of the impending pandemic,” Columbia University law expert Joshua Mitts told the Post, which noted that Paul sits on the Senate Health Committee.

Liberal commentator Keith Olbermann, a frequent critic of Paul, also accused the senator of using “insider knowledge to make a killing on Covid antivirals” weeks before the Trump administration “revealed the seriousness of the threat.”

Cooper, however, maintains that Paul did not attend any private briefings on Covid-19 prior to his wife’s investment, suggesting it was not made on the basis of any special congressional knowledge.

Still, detractors demanded that Paul face consequences for the long undisclosed trade, with lawyer and former Democratic candidate for Congress Pam Keith insisting he should be under “criminal investigation for insider trading.” Another commenter, apparently seeing no need for a probe, said Paul should simply “be in jail.”