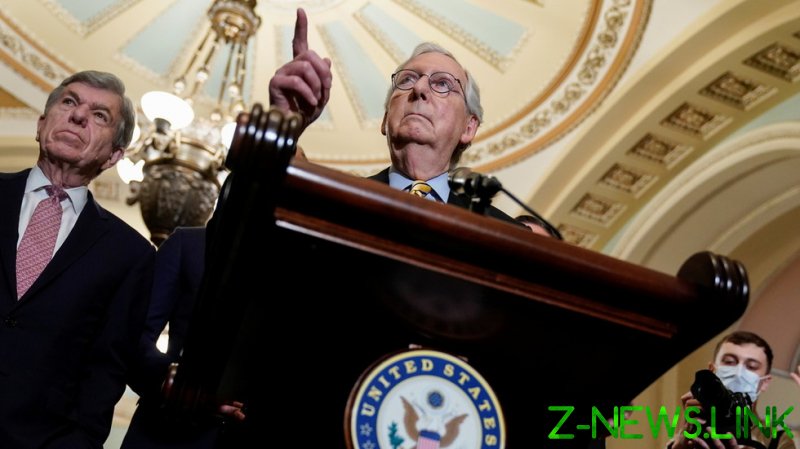 Dubbed the ‘For the People Act,’ the huge 800-page legislation fell short of 60 votes needed to advance to a floor debate on Tuesday, seeing a 50-50 split evenly along party lines, with Republicans voting unanimously to block the bill.

Designed to overhaul election rules in states across the country, the bill has been touted by Democrats as an urgently needed reform that would make voting easier for marginalized communities, limit the sway of money in politics and restrict partisan influence over how congressional districts are drawn, among other things. Republican critics, however, say the bill represents a massive federal overreach, arguing that it will infringe on states’ authority to conduct their own elections and that the law is ultimately intended to help Democrats.

Speaking on the Senate floor on Tuesday, Minority Leader Mitch McConnell (R-Kentucky) slammed the bill as a “transparently partisan plan to tilt every election in America permanently” in favor of the Democrats.

While the Democrats were able to achieve a unified caucus after a reluctant Senator Joe Manchin (D-West Virginia) finally agreed to back the bill earlier on Tuesday, the vote was never expected to succeed, as the GOP had made its opposition known.

The failed vote comes amid renewed debate over the Senate filibuster, a mechanism that allows lawmakers to indefinitely stonewall legislation, with growing calls among Democrats to do away with the practice for good. Several high-profile party members, including Senate Majority Leader Chuck Schumer, took to Twitter later on Tuesday to take swipes at the filibuster, some more directly than others.

“Our democracy is more important than the Senate filibuster. Pass it on,” Minnesota Rep. Ilhan Omar tweeted soon after the vote.