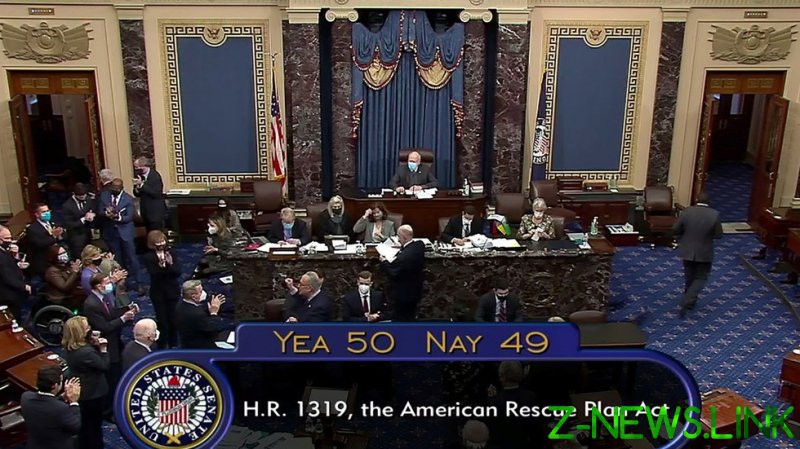 The bill passed by 50 votes to 49 on Saturday, wrapping up a day-long session of amendments and debate. Every Democrat present voted in favor of the bill, and every Republican against. Republican Dan Sullivan (Alaska) was absent, which meant that Democrats did not have to bring in Vice President Kamala Harris to break the Senate’s 50-50 tie.

Its passage came after more than 24 hours of partisan squabbling, during which scores of amendments were voted on. Among these amendments was a proposal by Sen. Bernie Sanders (I-Vermont) to insert a provision raising the federal minimum wage to $15. Eight Democrats sided with their unanimous Republican colleagues to vote down Sanders’ amendment.

Another provision, which took several hours to resolve on Friday night, extended unemployment benefits until September 6, at $300 per week. The original version of the bill proposed by the House allowed for $400 per week until the end of August. Joe Manchin, a moderate Democrat from West Virginia, had originally favored a Republican-proposed shorter extension of benefits, but changed his mind and sided with his party after a meeting with Majority Leader Chuck Schumer.

With the unemployment gridlock resolved, Republicans could do nothing to stop the Democrats using their razor-thin majority to pass the bill. As such, many of their amendments were proposed with an eye on forcing Democrats to support controversial positions by voting against them. These included amendments that would restrict funding for schools that allow transgender women to compete on female sports teams, and block funding for so-called ‘sanctuary cities’ that refuse to prosecute illegal immigrants.

For the majority of Americans watching proceedings, the core of the bill is the roughly half-trillion dollars it allocates to $1,400 stimulus checks. The version passed by the House restricts eligibility for these checks on a gliding scale to zero for people earning $80,000 per year.

In its slog through the Senate, Republicans took issue with the bill’s provision of bailouts to state and local governments, and to superfluous government programs. Notably, Wisconsin Republican Sen. Ron Johnson forced Senate clerks to read the entirety of the bill’s 628 pages aloud on Thursday night, in a bid to portray it as a “spending monstrosity.”