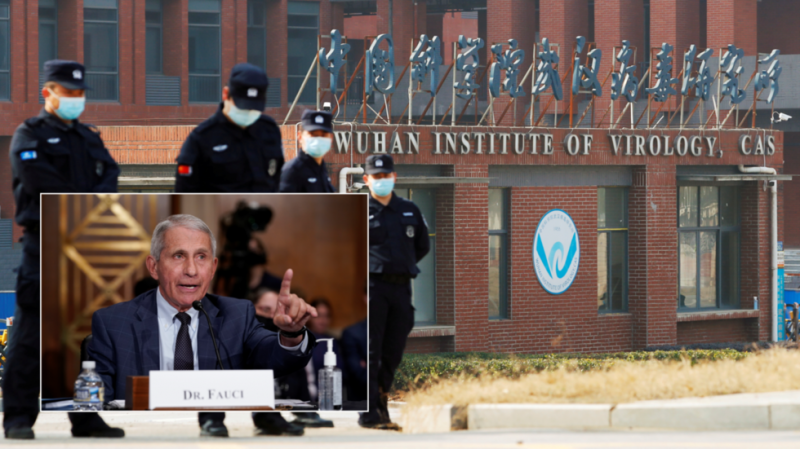 Demands for the health adviser’s firing come after the Intercept obtained more than 900 pages of material related to coronavirus research funded by Fauci’s agency – the National Institute of Allergy and Infectious Diseases (NIAID) – including previously unpublished grant requests from a US-based org that passed federal funds to the controversial Wuhan Institute of Virology (WIV) in China.

Senator Rand Paul (R-Kentucky), who has repeatedly sparred with Fauci throughout the Covid-19 pandemic, touted the document dump in a Tuesday tweet, saying the materials “make it abundantly clear that [Fauci] needs to be held accountable,” noting he had already asked the Justice Department to review the adviser for “lying” in previous congressional testimony.

The documents published by the Intercept show that the US-based organization, the EcoHealth Alliance, was granted some $3.1 million in funding approved by Fauci’s NIAID – later increased to exceed $3.7 million in total, according to other government records. Of that grant, $599,000 was funneled to the WIV, specifically to fund work to “identify and alter bat coronaviruses likely to infect humans,” according to the Intercept.

The firm’s grant application acknowledged potential dangers posed by the project, noting that “Fieldwork involves the highest risk of exposure to SARS or other CoVs [coronaviruses] while working in caves with high bat density overhead and the potential for fecal dust to be inhaled.”

The EcoHealth Alliance’s joint research with the WIV has raised other questions about potentially unsafe work at the Wuhan lab, and whether ‘gain-of-function’ research – which aims to increase the virulence and infectiousness of pathogens to better study them – was carried out there. The research was considered so risky that the government imposed a halt on federal funding in 2014, though that has since been lifted.

Fauci has repeatedly denied that his agency funded, directly or indirectly, any gain-of-function work at the WIV, including in high-profile confrontations with lawmakers such as Senator Paul.

However, according to Richard Ebright, a molecular biologist at Rutgers University who spoke to the Intercept after reviewing the documents, the research funded by EcoHealth included work to engineer novel viruses and test “their ability to infect mice that were engineered to display human type receptors on their cell.”

In a lengthy Twitter thread posted following the Intercept story, Ebright went on to argue that the WIV work indeed constituted “gain-of-function research as defined in federal policies,” and that Fauci and other top health officials have lied to the public about it.

The revelations have prompted a number of Republican critics to demand Fauci’s resignation, or even his outright firing, while some called for further investigation into his ties to research at the WIV.

“Just months after Fauci testified the NIH has never funded gain-of-function in the Wuhan lab, newly released documents show that he LIED & there was funding,” the Arizona GOP wrote on Twitter, adding “Fauci must be fired & investigated immediately!”

Despite Fauci’s insistence in public that his agency did not fund gain-of-function research in China, he has suggested in private that such funding may have occurred, as was revealed in a trove of communications released in June after a FOIA request by several news agencies.

In a February 2020 email to his top deputy at NIAID, Hugh Auchincloss, Fauci attached a research paper about a gain-of-function study at the WIV funded by none other than the EcoHealth Alliance (whose involvement was only disclosed later, after the authors initially “omitted” the funding source). The message took on an urgent tone, telling Auchincloss to read the paper and get back to him, as “it is essential that we speak.”

Auchincloss replied that he read the attached paper, explaining that the research in question was performed “before the gain of function pause” – referring to the federal funding moratorium – and that another staffer would “try to determine if we have any distant ties to this work abroad.”

While the email trove does not appear to contain any follow-up from Auchincloss about the gain-of-function study, the exchange suggests there was concern among top NIAID officials, including Fauci himself, that the agency may have contributed to the controversial research.

Though Sen. Paul asked federal prosecutors to investigate Fauci’s testimony for perjury in July, to date it is unclear whether any probe has moved forward. The Joe Biden administration, meanwhile, continues to rely on Fauci as one of its top pandemic advisers, and is unlikely to heed Republican calls for his dismissal.