Sen. Blumenthal pressures Zuckerberg to BAN Steve Bannon from Facebook over ‘calls for murder,’ gets reminded of Vietnam War lies 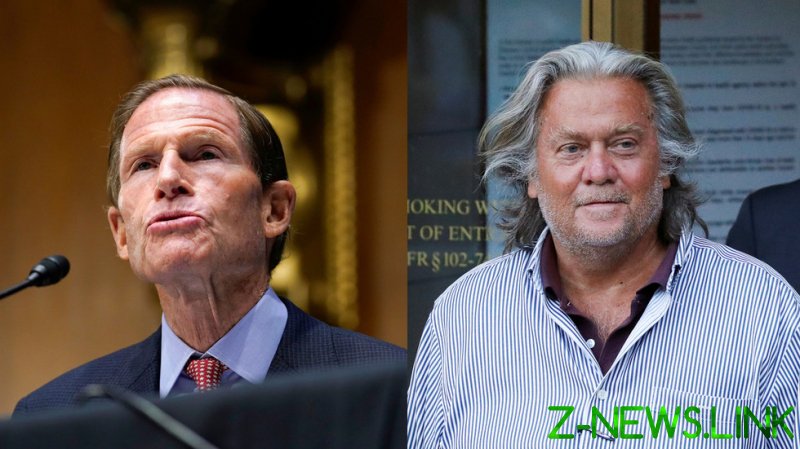 Speaking remotely at a Senate hearing on Tuesday, the Connecticut Democrat referred to a Nov. 5 podcast in which Bannon, formerly President Donald Trump’s chief strategist, said he would like to put the heads of Dr. Anthony Fauci and FBI director Christopher Wray “on pikes” as a warning for other bureaucrats to “get with the program or you are gone.” Twitter permanently shut down Bannon’s account, and Facebook censored a video of the podcast, but Zuckerberg stopped short of banning the Trump ally altogether.

“How many times is Steve Bannon allowed to call for the murder of government officials before Facebook suspends his account?” Blumenthal asked Zuckerberg.

The Facebook founder responded by saying Bannon hadn’t accumulated enough policy violations to be banned, at which point Blumenthal interjected, asking, “Will you commit to taking down that account, Steve Bannon’s account?” Zuckerberg replied, “Senator, no, that’s not what our policies would suggest that’s what we should do in this case.”

Blumenthal then suggested that Facebook had stopped doing fact checking and had forgiven rules violations on conservative accounts, such as those of Breitbart News, Donald Trump Jr., Eric Trump and Gateway Pundit, to dissuade allegations that it was being politically biased against Republicans.

Ironically, moments after pressuring Zuckerberg to shut down Bannon’s Facebook account, Blumenthal then said Trump has tried to “bully” social-media companies by threatening to take away their legal protections from liability for the content posted by their users.

“I’m very concerned that, in fact, Facebook seems to have a record of making accommodations and caving to conservative pressure,” Blumenthal said. He added that Trump and his allies are “working the refs, and they’re winning.”

Conservatives, such as Seattle radio host Jason Rantz and author Michelle Malkin, pointed out the hypocrisy of Blumenthal’s exerting political pressure on Zuckerberg to punish Bannon while chiding Trump for trying to do much the same. “Blumenthal lives in Bizarro World,” Malkin said. Another commenter replied, “Richard Blumenthal is the Michael Avenatti of the Senate.”

But much of the reaction to Tuesday’s hearing focused on how Blumenthal, who was branded “Hanoi Dick” and “Da Nang Dick” by Trump for lying about serving in Vietnam as a member of the US Marine Corps, suggested that Facebook and Twitter need to do more to combat disinformation. “I’m concerned that both of your companies are backsliding, retrenching,” Blumenthal said. “You are failing to take action against dangerous disinformation.”

Radio host Lionel retorted: “How does Senator Blumenthal claim to worry about social-media fact-checking when he told the world that he was in-country in Vietnam, which turned out to be a complete and utter fantasy?” Others agreed, including one observer who said, “He’s completely lacking in self-awareness.”

Rantz pointed out that Blumenthal not only lied about his military record, but also pushed the conspiracy theory that Trump’s campaign colluded with Russia to win the 2016 election.

Yet another layer of apparent hypocrisy was Blumenthal’s outrage over Bannon’s comments and his absence of concern over some notorious leftist posters, such as comedian Kathy Griffin, who have wished violence upon the president and his supporters and posted outright graphic imagery, such as a mock beheading of Trump.