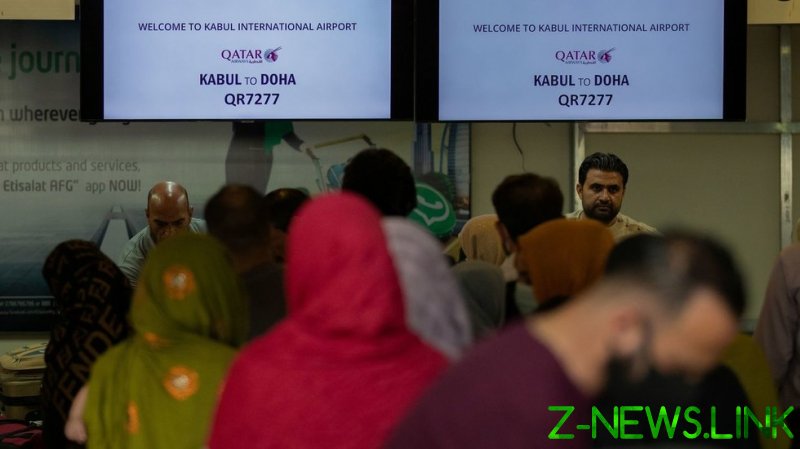 A total of 117 people – 28 citizens, 83 green card holders, and six Afghans with Special Immigration Visas granted to employees of the US military during the 20-year war – took off from Kabul on Tuesday, a coalition of nonprofits had announced triumphantly. They were supposed to transfer to a chartered Ethiopian Airlines flight in Abu Dhabi and land in New York City – except the US authorities denied them permission to do so.

The group was stranded in Abu Dhabi when the US government denied their charter flight permission to land in the US, saying it needed to vet the passenger manifest, Bryan Stern of the nonprofit Project Dynamo, told Reuters on Wednesday.

“I have a big, beautiful, giant, humongous Boeing 787 that I can see parked in front of us,” he added. “I have crew. I have food.”

Instead, Stern and the evacuees ended up at the airport in the Emirates, under police watch. “We are in custody as we speak in Abu Dhabi. All of us are locked up here together,” he told the agency early on Wednesday.

Several groups, including Stern’s Project Dynamo, the Human First Coalition and the Shadow Warriors Project, banded together to gather the Americans and Afghans left behind after the US military halted its airlift out of Kabul on August 30.

The US military airlift ended up flying 124,000 people from the Kabul airport, but fewer than 6,000 were Americans, and thousands of SIV recipients were left behind. The Biden administration reportedly “struggled” to identify more than 110,000 Afghans it evacuated, amid reports some had multiple underage “wives,” others may have had ties to terrorist groups, and at least one had been a convicted rapist previously deported from the US.

Reports of half a dozen cases of measles – a highly infectious childhood disease – among the Afghans flown into Virginia and Wisconsin halted the resettlement flights into the US earlier this month.

The nonprofits organizing the charter actually had their evacuees vaccinated for measles and tested for Covid-19, they said announcing the flight – showing more diligence than US authorities when they dealt with over 15,000 Haitian migrants that came across the border in Texas recently.

Stern told reporters that the Homeland Security Department had flagged one of the evacuees as a “problem,” and told the Abu Dhabi airport, “this guy doesn’t fly.” He wasn’t sure if that was the reason for holding up the entire flight, however.

Reached by Reuters for comment, the DHS said “all US-bound flights must follow the established safety, security and health protocols before they are cleared for departure,” to “ensure all passengers are screened appropriately.”

The State Department said its embassy in the Emirates “has been working around the clock to verify the accuracy of the passenger manifest” and was coordinating with DHS and other agencies “to ensure the passengers are screened and vetted before they are permitted to fly” to the US.

Stern confirmed that the group was indeed scheduled to depart on Thursday, on board a regular flight to Chicago that the State Department “graciously” had agreed to pay for.