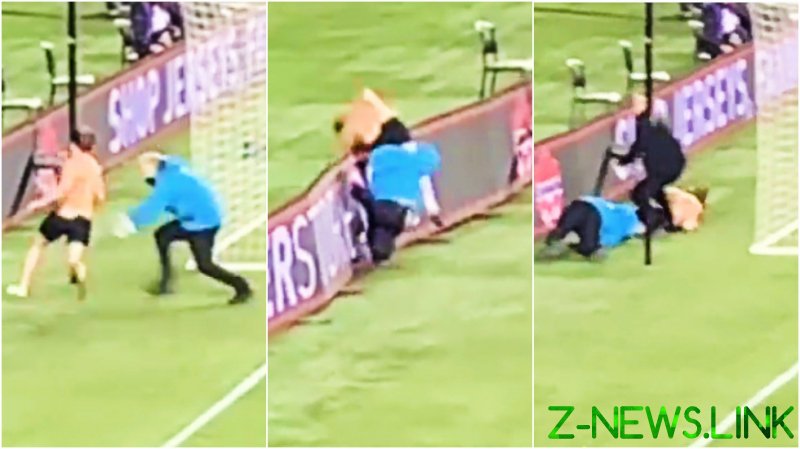 A half-naked man halted play between Canada and Costa Rica with the score level at 0-0 in Edmonton’s Commonwealth Stadium.

Deep in the 18-yard box, he jogged through a pack of three men including Canada ‘keeper Milan Borjan.

Yet a guard in a blue jacket was merely biding his time before calculating a run to perfection which saw him pull off something like a cross between a hockey check and American football tackle on the over-excited punter.

The fan folded over the hoardings like laundry to dry, with the security guard pulling him back onto the turf while clutching at his legs.

The match finished 1-0 to Canada thanks to a Jonathan David goal after 57 minutes.

But the “perfect tackle”, as some fans dubbed it, was the main talking point online afterwards.

“For me, Clive, that’s a straight red,” said one enthusiast, using a phrase usually coined by British viewers.

“But to be fair, was it a clear goalscoring opportunity?,” another jokingly asked.

“The antelope had no chance against the cheetah,” quipped a popular ESPN pundit.

As the Canadian Football League outfit the Toronto Argonauts popped up in the replies with eye emojis, a fellow Canuck said: “Our national rugby team needs to figure out who the guy was that threw the tackle. They need some help.”

A party pooper added a more serious note by suggesting the potentially painful challenge would make for a “nice, easy lawsuit” for the fan.

“No, he shouldn’t have been there – but [there was a] definite case of unreasonable force,” added the internet lawyer.

“Seemed reasonable to me,” said a backer of the bouncer. “Not sure what you see wrong with it.”

The result meant Canada are closing in on a place at the finals and are the only team with an unbeaten record in the regional CONCACAF qualifying.