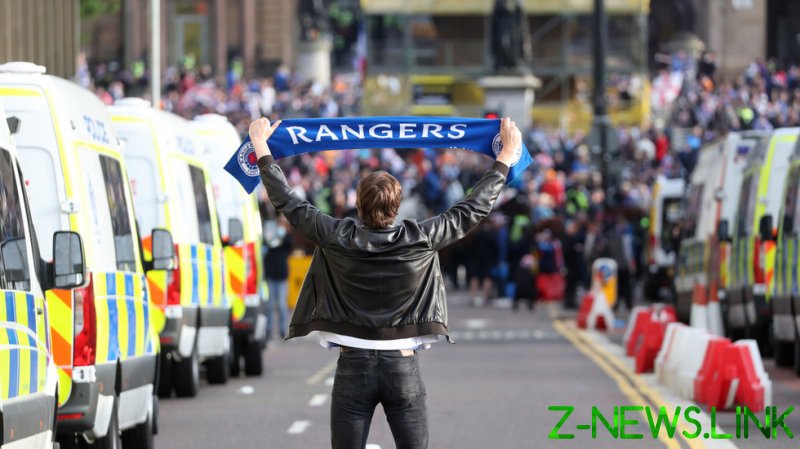 “To say I’m utterly disgusted by the Rangers fans who rampaged through the city would be an understatement,” Sturgeon tweeted on Sunday. “In normal times, the violence & vandalism, & the vile anti Catholic prejudice that was on display, would have been utterly unacceptable. But mid-pandemic, in a city with cases on the rise, it was also selfish beyond belief.”

Rangers lifted the Scottish Premiership trophy on Saturday after defeating Aberdeen 4-0 at home in Ibrox. Rangers went the season unbeaten, and their victory was a given since March. Still, having lost out every year since 2011 to rivals Celtic, the win was a decade in the making, and Rangers’ die-hard fans celebrated accordingly.

Thousands marched from Ibrox toward George Square in the center of Glasgow after the win. Scotland’s coronavirus restrictions clearly prohibit such large gatherings, and police earlier urged supporters “not to gather and to take personal responsibility for their actions.”

The warnings fell on deaf ears, and an estimated 15,000 fans packed into George Square. They cheered and chanted for hours, and violence followed, in the words of Assistant Chief Constable Gary Ritchie, “as the effects of alcohol took hold.”

Police attempted to disperse the crowd, and were pelted with missiles and flares. Fights between fans, and between fans and police, broke out. Some graphic scenes of street violence were caught on camera. In one particularly grizzly incident, a man was repeatedly kicked in the head on Queen Street, around the corner from George Square.

As of Sunday morning, 28 people had been arrested, and Ritchie said in a statement that more people “involved in these ugly scenes” would be identified and arrested as enquiries continue.

The rivalry between Rangers and Glasgow Celtic is tinged with sectarianism. Rangers’ supporters are predominantly Protestant unionists, while Celtic’s fanbase is Catholic and sympathetic to the Irish republican cause. The fans celebrating in George Square were heard singing anti-Catholic songs, and sectarian graffiti was spotted on Irish businesses throughout the city.

Yet some of these fans accused Sturgeon of unfair treatment, especially as she sided with protesters last week who blocked immigration officers from removing two illegal immigrants from a flat in the city. The demonstrators surrounded a van taking the immigrants away, forcing officers to release them. Sturgeon called the immigration raid “staggeringly irresponsible.”

Additionally, Sturgeon has not spoken out against a pro-Palestine protest taking place on George Square on Sunday afternoon.