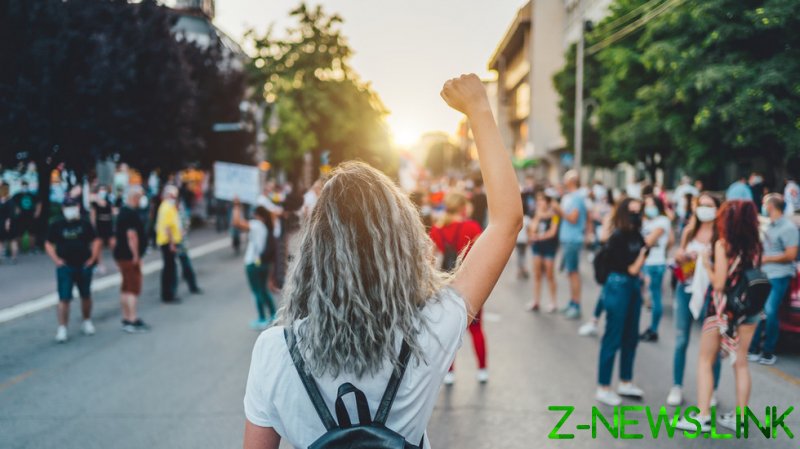 Scotland is developing some of the most authoritarian laws in the Western world. Having already made saying offensive things in the comfort of your own home a potential hate crime, the Scottish government now looks set to make sexism a criminal offence.

An independent Working Group on Misogyny was set up earlier this year, and has a remit to explore the pros and cons of making sexism a hate crime.

But this is not simply about actual crimes, like beating up a woman while full of hate. The working group is also focusing its attention on the issue of misogyny and sexist behaviour in and of itself, like wolf-whistling for example.

Indeed, looking at the concerns of the working group so far, it would appear that almost all aspects of relationships between women and men and girls and boys are being examined to determine how the state and police can better manage our personal and private relationships.

The blurb from Holyrood, the Scottish parliament, admits that there is no clear or accepted definition of misogyny. Indeed, when you read the books and articles authored by those involved with the committee, it would appear that misogyny can be just about anything they want it to mean. Consequently, the potential for state intervention around this issue is vast.

If misogyny becomes a stand-alone crime, how we talk to the opposite sex, develop intimate relationships, how we interact in public and private, and even how girls and boys learn to relate to one another could all become framed through law and policing. The scope for criminalising intimacy itself is extraordinary.

Despite being called an ‘independent’ group, it would be hard to find a more biased and one-dimensionally minded committee than the Independent Working Group on Misogyny.

The very remit for the group, as set out by Holyrood, is that the committee must apply a “gendered analytical lens” to “data sets, literature reviews and lived experience.” In other words, the instructed operation for this group is predicated upon a particular feminist outlook and ideology – one, it is worth noting, that not a single member of the Scottish electorate has voted for.

The committee is chaired by Baroness Helena Kennedy QC whose book, ‘Eve Was Shamed’ has been described as a work that explores “what comes after #MeToo.” Kennedy has described the # movement as, “not much different from suffragettes throwing a brick through a window: ‘We’ve had enough. You’re not listening to us; listen to this.’”

Included in the number of speakers who have appeared before the committee – and appear to be almost all feminists – is Kate Manne. She is the author of ‘Down Girl: The Logic of Misogyny’, a book described as “deeply relevant to the #MeToo movement.” Her next book was entitled ‘How Male Privilege Hurts Women’. The blurb for this enlightened publication explains that Manne believes society is based on “male entitlement” and that all of us are implicated in a world based on “toxic masculinity.”

Another expert who has spoken to the committee is Liz Kelly, a professor of sexualised violence who developed the idea of a continuum of violence against women, where child abuse and incest is discussed as being mapped on the continuum of ‘normal’ patriarchal family structures, part of the gender order of inequality and domination. In case that language isn’t clear, Kelly thinks child abuse, incest and beating up women are a mere extension of normal family values.

The working definition of misogyny being used by the committee includes talk of “controlling behaviour” that can be “conscious or unconscious,” and that both men and women, “can be socialised to accept.”

Here, in this talk about the little people being “socialised to accept” certain forms of behaviour, we see what law really means to the Scottish parliament today. Scottish law is no longer a representation and extension of the ‘will of the people’ or a reflection of our collective moral values epitomised by the ‘reasonable man’ or the ‘man on the Clapham omnibus’.

Rather, law making has become an activity carried out by our ‘aware’ superiors who understand the need to re-socialise us, to change our unconscious biases in line with their enlightened beliefs.

The task of the Independent Working Group on Misogyny is to socially engineer each and every one of us into adopting a victim feminist ideology.

The modern elites involved in the working group like to think that they are reasoned, enlightened and progressive but in reality, they are riddled with prejudice and indeed hatred for ordinary men and women who do not think like they do: Remember, your normal family values are part and parcel of the problem of violence and abuse against women and girls!

Baroness Helena Kennedy, interviewed on GB News, explained that “there is a misogyny in our society, a sense of entitlement regarding sex… but it is not leading to convictions and investigations.” She noted that “Dame Vera Baird, who’s the victims’ commissioner, has described an almost decriminalisation of rape, sort of normalisation of rape… at the moment there is something scandalous about the failure to prosecute these cases and failure of juries to convict, an unwillingness to do so.”

But is society, as Kennedy suggests, almost decriminalising rape? Do we the public think that rape is kind of normal? And are juries really made up of Neanderthals who are unwilling to convict rapists?

If Kennedy bothered to read the most comprehensive research by Professor Cheryl Thomas about juries, she’d find that, as Thomas notes, “hardly any jurors believe what are often referred to as widespread myths and stereotypes about rape and sexual assault.”

The myth of sexist juries is just one of the many prejudices that make up the outlook of the working group on misogyny. Another is the idea of ‘internalised misogyny.’ This is the idea promoted by Kate Manne and others that most women are essentially too stupid to recognise the misogynistic world that they live in.

Manne explains in her book ‘Down Girl’, that “all of this is to say that misogyny makes people so irrational.” Maybe, she continues, rather than talk to these women or challenge their ideas, “the thing to say, somewhat reluctantly, is – f**k ’em.”

The enlightened Independent Working Group on Misogyny thinks that stupid or fragile women need to be protected from a world of ‘toxic masculinity’, and these people are tasked with ridding our society of hate? Go figure.