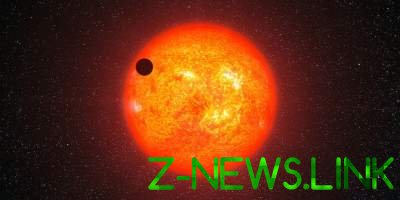 One of the most amazing events in modern astronomy was the boom of discoveries of various exoplanets.

Hundreds of new worlds located outside the Solar system, quite possibly very similar to the Ground, waiting for them to open the life. However, the results of a new study conducted by the University of Vienna and the space research Institute (IWF) Austrian Academy of Sciences (ÖAW) in Graz, presented in the journal Astronomy & Astrophysics Letters (a press release published on the website Science Daily), say that it is a joyful event overshadows one very sad fact: the atmosphere of these new worlds are likely not able to withstand the radiation of the stars around which they revolve.

For life, at least for the one that will be like the earth, stars will always be crucial: they create through their radiation livable region. And if the planets revolve in this region, the temperature on its surface remains in the range where water can exist in liquid state. As for living beings, whose life may be based on different principles, in this respect, science does not yet have any clear ideas. But the power of the radiation of stars can also be fatal for areas suitable or potentially suitable for life – when very active stars literally blow away the atmosphere of such planets.

Many exoplanets rotate around a so-called M-dwarfs, also known as red dwarfs. As stars of this type are much smaller and cooler than our Sun, researchers them for a very long time simply ignored. Only recently they were the center of attention of researchers engaged in the search for potential extraterrestrial life. For example, the nearest to our Solar system star, Proxima Centauri belongs to M-class stars. Its size is only 1/8 the size of our sun.

The main problem with these stars is that their evolution is markedly different from the evolution of stars like our Sun. At the time, especially in the first hundreds of millions years of its existence, our light, too, was different “violent temper”, which is characterized by high activity. But then it has reduced production of high-energy ultraviolet and x-rays. Unlike stars like our Sun, M dwarfs can maintain a very high level of radiation over several billion years.

And these emissions have dramatic implications for planetary atmospheres, especially those that revolve around those stars on close orbits, in the so-called “habitable zone”. Long active radiation of the parent star very hot gases in the upper atmosphere of such planets to a few hundred degrees Celsius, leading to their evaporation.

Scientists from the University of Vienna with colleagues from other scientific institutions have made estimates of how fast can be the process of disappearance of the atmospheres of the planets near red dwarfs. Simulations showed that earth-like planets orbiting a very active star, it will happen catastrophically quickly – less than a million years. In the astronomical scale – almost instantly, researchers say.

Since our Sun has calmed down relatively early, after a few hundred million years our planet has the opportunity to create his nitrogen atmosphere, which protects its surface from exposure to the radiation of the star. In turn, the new calculations show that planets in the habitable zones of red dwarfs may stay without this protective shell for longer – billions of years.

To summarize, researchers say that these results reflect the likelihood, as in planets orbiting M-class stars could be formed and maintained life. Prospects, as you probably already realized, is not very bright.