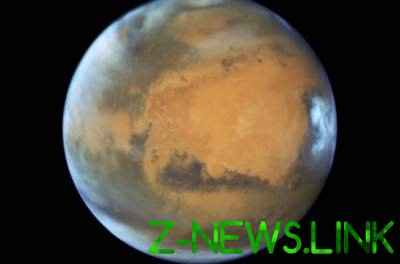 Mysterious lines on the surface of the red planet could occur by the movement of the “ice sled”.

Scientists said that the mysterious lines on Mars, which are considered evidence of the existence of flows of water, in fact could be formed by the movement of the “ice sled” from frozen carbon dioxide. The researchers ‘ findings were published in the journal Scientific Reports.

The researchers tried to recreate the process of “dry” formation of ravines and dark lines in the laboratory. To do this, scientists created a complete copy of one of the dunes on the surface of Mars, and have tracked how carbon dioxide will interact with the sand and soil of the earthly “copies” of the red planet.

When scientists placed a piece of dry ice on the surface is like a mini-dune and raised the temperature of its surface, simulating the onset of Martian spring, the ice had begun to slide along its slopes, moving down like a kind of “boats” whose bottom “crushes” the ground and paving a strip in it.

See also:  In Britain told about further cooperation with Russia

“The temperature of the block of ice and soil of Mars will be different due to ice will occur a kind of the gas cushion, which will allow it to literally “levitate” and slide down just as the puck slides across the table for a mini-hockey. When it reaches the bottom of the slope, the ice will stuck into the ground and then completely evaporates, leaving only a hole,” — said the head of the research team, Lauren McKeon.

This pit, as they note, in some cases, formed so quickly that a piece of ice is completely “drowned” in it and gave rise to a kind of geyser of sand and dust that got into the thin Martian air with jets of carbon dioxide. And pits and traces of these geysers, as noted astronomer, is almost always found close to the gullies on Mars.

See also:  Scientists have sounded a sad prediction for the Ukrainians

According to calculations of scientists, even relatively small “saucers” can generate a very wide and deep channels, whose width can range from one meter to twenty meters. Soon the scientists will test those predictions, observing the formation of new channels on the surface of the real Mars.

In September 2015, NASA experts held a press conference during which he spoke about what he had found evidence of liquid water on the surface of Mars. Later the Agency was represented animated video that simulates the flow of water on the red planet.