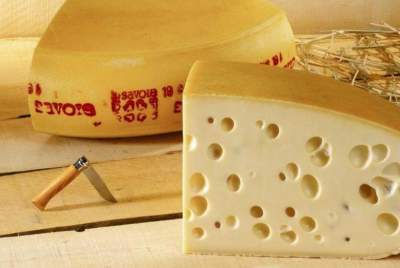 This phenomenon is quite unusual.

We all know this truth, and it is even confirmed by numerous scientific experiments: music favorably or, conversely, negative (despite what the music is) affects the mood and health of a person.

There is even such a thing as “the Mozart effect”, according to which a certain work of the great composer (the Sonata K. 448) improves memory and generally contributes to the improvement of the human brain.

But scientists at the University of the arts Bern together with well-known cheese producer Beat Wampfler conducted an experiment that shows that music has an impact even on cheese during its ripening.

The researchers within six months of ripening Emmenthal cheese, dividing it into several lots, they are subjected to exposure to various music starting from classical, including works of Mozart, to the most modern genres of this art. There was also a batch of cheese, which is matured in silence, that is traditionally.

When the product is ripe for the tasting were invited to the best experts who “blindly” determined whether the different party cheese in this case from each other, and if so, which one turned out the best. It turned out that “Emmental”, despite the same technology, have turned out different. The party, which is traditionally matured in silence, was not the best.

But on the other hand, was surprised that the best cheese was named the one that matured, alas, not under classics and under hip-hop. As defined by the tasters, in this case the product has been made with its soft floral flavor and aroma.

The authors of this experiment, then conducted biomedical research, which confirmed that different lots of cheese, “listening” during six months of ripening to different music, have different chemical composition. Now scientists intend to continue research in this regard so that in the future it had not only purely theoretical but also practical importance.

That is, they plan to develop some recommendations how to use some music to create new cheeses, to achieve amazing flavors of this dairy product because of musical works in the world are countless, especially because they can be combined with different cheese technologies. In this case, cheese makers open truly unlimited possibilities in the production of products with the most refined flavors and aromas. And not only for cheese, I suppose…