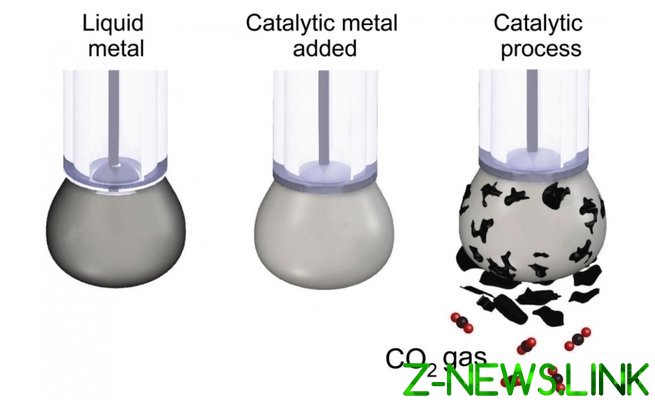 An international group of scientists has discovered a new method of converting CO2, which works at room temperature. The opening will not only reduce carbon emissions but also allows you to create a new type of supercapacitors for electric vehicles.

The magic of transformation

The technology of obtaining solid particles of carbon from gaseous CO2 introduced an international group of scientists under the guidance of experts from RMIT University (RMIT) in Australia. The method allows to purify the air from emissions of carbon dioxide and to find industrial applications.

“Wrap back time is impossible, but we can neutralize emissions by transforming carbon dioxide back into the coal,” said Dr. Torben Doenecke, author of a study published in the journal Nature Communications.

Similar experiments were conducted previously, but to achieve a transformation was possible only at high temperatures — usually at least 600°C. Now scientists have been able to start the process at room temperature.

For this they used the catalyst from the liquid metal obtained from an alloy of gallium, indium and tin, which complements the catalytic active component, cerium.

See also:  Scientists have created a new map of the Earth

The resulting catalyst was introduced into the flask with CO2, which is pre-bonded with a liquid electrolyte.

Under the influence of electrical discharge, the catalyst started the process of converting carbon dioxide into solid carbon flakes. They are formed on the surface of the liquid metal, where they are easy to remove, and the substance is then reused.

Without gas and risk

After the procedure is completed, the resulting material can be placed under the ground without risk of leakage. This is a major breakthrough. As explained by New Atlas, modern technologies of CO2 capture turn the gas into a liquid compound, after which it is pumped underground.

In contact with basalt layers of the substance solidifies, but only part of it, and secondly, it is necessary to wait about two years. And the remaining gaseous portion, means a permanent risk of leakage.

A technology to convert gaseous carbon dioxide into solid carbon reduces the probability of leaks to a minimum, because buried under the ground already solidified material.

However, to bury the coal is optional. After the procedure, it can be used as an electrode.

“We found an additional advantage. It turned out that the carbon is able to maintain an electric charge, which means it can be used as a supercapacitor for vehicles of the future”, — said the leader of the study mandrel Israfilzadeh.

In addition, the conversion process in the tank remains a by — product synthetic fuels for industrial applications.

The technology is not yet adapted for large-scale applications, but in the future it can be used for air purification from impurities produced by the combustion of hydrocarbons.

Only in 2017, humanity has produced 32 billion tons of CO2. If you convert all this mass in the solid deposits of coal, we can fill its reserves for years to come.

According to analysts, by 2030 CO2 emissions must be reduced by at least 55%. However, to stabilize the temperature of a simple emissions reductions are no longer enough. It is also necessary to develop methods of removing carbon dioxide from the atmosphere.