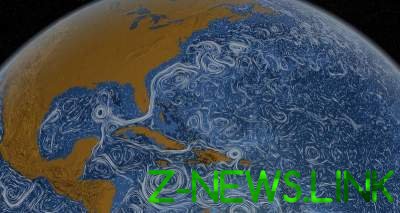 The finding was discovered in the Tasman sea.

Theorists have long predicted the existence of double vortices, however, to observe them in nature is still not possible.

The Tasman sea is drifting two related to each other a giant whirlpool, the existence of which was previously confirmed only the hydrodynamic calculations.

Ocean eddies are formed when part of the flow separates from the main flow and forms a ring — annular flow with a fixed mass of water in the center. Such vortices is a common phenomenon; they cause the appearance in cold parts of the ocean fish and plankton that are normally found in warm southern waters.

Theorists have long predicted the existence of double vortices, however, to observe them in nature is still not possible.

The existence of such double rings can lead to non-mixing of water in the ocean and migration of living organisms, says marine biologist Chris Hughes (Chris Hughes) from the University of Liverpool.

After scientists noticed a double vortex in the Tasman sea, they turned to the old archives. Analysis of satellite data for previous years showed that since 1993 they have registered as many as 9 such phenomena: eight off the coast of Australia. and one southwest of the southern tip of Africa.