Scientists have discovered a strange insect 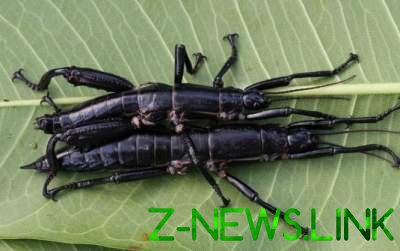 In Oceania found a rare insect

Naturalists have found on a small volcanic island in the Pacific, a colony of insects, considered extinct about a hundred years.

These animals reach six inches or 15 centimeters in length. It was thought that these insects lived only on the island of Lord Howe, where they quickly disappeared after Europeans on their ships was brought back rats.

In the middle of the last century, a similar insect was discovered on another island, or rather rock, called the Pyramid ball. A new species of stick insects didn’t look quite as old Museum specimens, researchers have calculated that in front of them – two different species. And only recent studies, the results of which were published on 5 October 2017, showed that insects belong to a single species.

“We found that all were hoping to find. Despite some significant morphological differences, it is really the same,” says the author, Alexander Mikheev from the Institute of science and technology in Okinawa.

According to scientists, the structure of the mitochondrial DNA differed by only 1% insects, with a Pyramid ball and stick insects from Lord Howe island, which clearly suggests that they are one and the same.

“Stick insects from Lord Howe island became a symbol of the fragility of island ecosystems. Unlike most stories related to the disappearance of species, it got a unique chance,” says Alexander Mikheev.