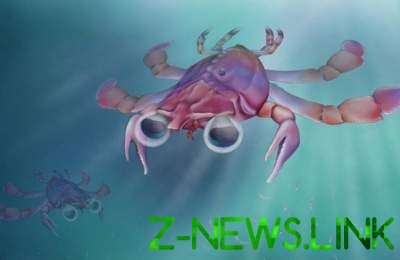 Limbs in these ancient crabs was lobe.

Researchers have described a new family, genus and species of crab that lived about 90 million years ago. It was a tiny arthropods with spherical eyes and lobe limbs adapted for swimming.

A group of paleontologists, under the leadership of Xavier Luc (Javier Luque) from Yale University described the fossil remains of 64 arthropod, reaching a length of 1.6 centimeters, and a maximum width of about one centimeter, and lived around 90 million years ago. These arthropods lived on the territory of the modern United States and Canada and, according to scientists, represent a previously unknown family of crabs.

See also:  NASA recorded the explosion of a meteorite on the moon

Limbs in these ancient crabs were lobe adapted for swimming (such as a limb was previously known only from sea Scorpions, which disappeared approximately 250 million years ago). Anatomically, the adult specimens of a previously unknown ancient crabs was similar as in adults of decapod crustaceans and their larvae late (being in this case formed by individuals with pronounced sexual dimorphism). In addition, discovered crabs had globular eyes and two small antennas.

See also:  Tina wowed the audience with an unusual outfit

A new genus and species received the name Callichimaera perplexa, and a new family of scientists called Callichimaeridae. Work on the new study were published in the journal Science Advances.