Home / INCREDIBLE / Scientists have captured a star that destroys planets

Scientists have captured a star that destroys planets 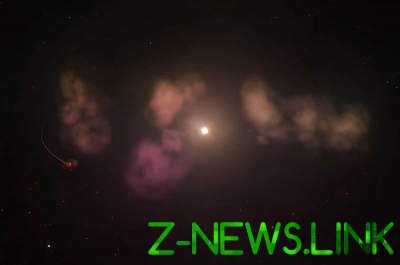 Star RZ of Fish and then is obscured by a dense cloud of dust that was the remains of her destroyed planet or more
Variable star RZ (RZ Psc) is 550 light years and from time to time changes brightness dramatically and unpredictable.

Scientists have linked these fluctuations with dense gas and dust clouds – the remnants of the destroyed star, planet, or even several. This Crimson Kristina (Kristina Punzi) at Rochester Institute of technology and her colleagues say in a paper published in The Astronomical Journal.

The star RZ Psc exceptionally young – only 30-50 light years, and every now and then flickers, sometimes becoming ten times dimmer for a few days. It emits much more energy in the infrared range – as much as 8 percent of its total luminosity falls on the IR waves – which suggests there is around a very dense and hot gas and dust cloud. No matter how young RZ Psc, but gas-dust disk the time of its formation had to disappear for a few million years. Where did this substance?

Astronomers suggested that this shows a massive asteroid belt that surrounds RZ Psc: colliding and collapsing, the body creates around the star cloud of dust. According to another version, RZ Psc is not as young as you think, and are actually much older than the Sun, she began the transition to stage red giant, expanding and turning into debris near the planet. In the new work, Crimson and her colleagues star presents a combination of these hypotheses.

The researchers examined the RZ Psc using the European space telescope XMM-Newton, and instruments ground-based observatories Lick in California and the W. M. Keck in Hawaii. X-ray XMM-Newton showed that the star emits brightly in x-rays about 1,000 times brighter than today’s Sun, indicating a young age.

The average surface temperature is 5330 °C, slightly cooler than the Sun. In addition, the composition of RZ Psc discovered an unusually high content of lithium – he is involved in thermonuclear reactions and gradually disappearing, it also serves as an indicator of youth stars.

Ambient RZ Psc dust cloud is 230 °C, scientists estimate that its radius is 50 million km – roughly three times less than the Earth’s orbit and even a little less than mercury’s orbit. Astronomers consider it the result of catastrophe on a planetary scale: the star can actively pull the substance up close subsistema object or a giant planet; or this object can be finally destroyed her gravity. Finally, besides could result collision, which experienced large gas planet with each other.