Home / INCREDIBLE / Scientists found rocks of the times of glaciation

Scientists found rocks of the times of glaciation 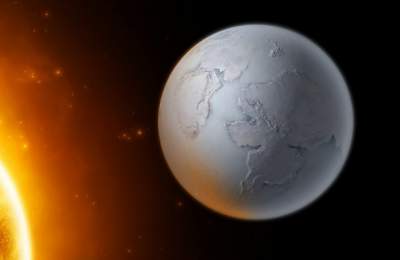 Together the two samples suggest that the melting was rapid and took about 1 million years.

A team of Chinese and American researchers found the rocks of the times of glaciation and calculated the rate of melting of the earth’s surface about 600 million years ago. Results and calculations are presented on the pages of the journal Geology.

Cryogeni (720 to 635 million years ago) marked the most ambitious in the history of glaciation of the Earth, called “Earth-snowball.” In deep freeze planet loaded up the next sequence of events.

Order 800 – 900 million years ago under the influence of magmatic emissions, crush the crust of the earth, the supercontinent Rodinia begins to break up. This entails the formation of numerous coastal shallow seas that inhabit without thinking of photosynthesizing algae and those who eat them. Blooming phytoplankton absorbs atmospheric carbon dioxide (CO2), thus creating the effect, reverse the greenhouse. As a result, the next 200 million years the Earth spends under a thick ice cover.

“The ice formed several thousand years, melted away in less than one million years, says Shuhai Xiao, paleobiology from the Polytechnic University of Virginia and co-author of the study. – This time period is just a moment compared to the age of a planet 4.56 billion years”. The team knows for sure what caused the reverse process, however, it could be a result of the work of ancient volcanoes producing carbon dioxide back into the atmosphere.

To shed light on the rate of deglaciation (liberation of the land of the ice cover), Xiao and his colleagues dated volcanic rocks in Yunnan province in southern China. The rocks were covered with unique deposits of limestone and dolostone, which were formed during defrosting. Using the methods of radiometric Dating, the team found that the age of volcanic rocks is about 634,6 million years. Alone, this number will not help to calculate the rate of melting, however, in 2005, another group of scholars have dated similar volcanic rocks in the Chinese province of Guizhou. The age of these rocks is made up 635,2 million years.

See also:  Smog instead of oxygen: named the most polluted city on the planet

Researchers claim that at the moment it is the most reliable calculation of this indicator.