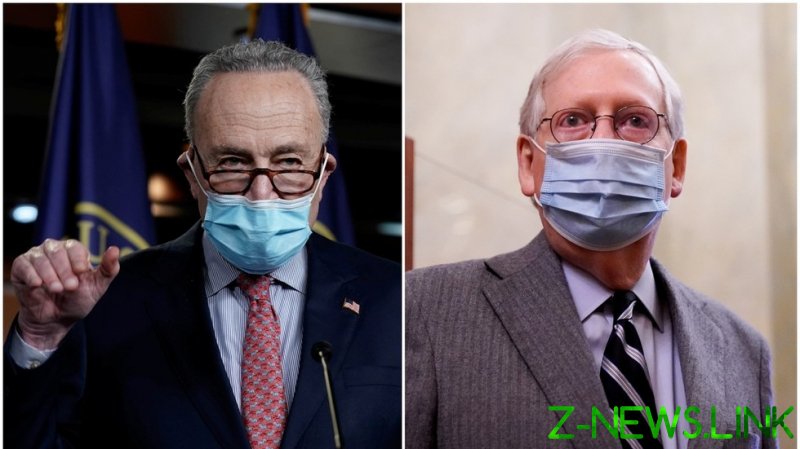 Schumer, a Democrat, floundered as he attempted to demand $2,000 checks for individual Americans on Tuesday, blaming Republicans (and specifically Senate Majority Leader Mitch McConnell) for resisting the inclusion of higher payments in the original legislation.

The senator blundered, confusing the aid package with the National Defense Authorization Act – another subject of bitter partisan sniping – before addressing a “Mister-Madam President.” He finally admitted defeat with a frustrated “where am I?” and was brought back to reality by an aide.

The senator has held his seat since 1998 and at 70 years of age is actually one of the younger congressional leaders. His House counterpart, Speaker Nancy Pelosi, is 80, and his Senate nemesis McConnell is 78. One user pointed to the aide’s speedy response, reasoning that Schumer had experienced such mishaps before. Certainly, it wasn’t his only slip-up during the monologue – the senator had earlier insisted Americans be allowed to “keep their jobs, pay their families” before correcting himself to “feed their families.”

Others questioned whether it was Schumer’s memory that was going at all, suggesting he didn’t care about the plight of the growing American underclass and was just reading lines.

By positioning the Republicans as the real enemy of the no-longer-working class, the senator likely increases the chance of Democrats winning the two Senate seats up for grabs in Georgia next month. Tellingly, both incumbent Georgia Republican senators have made their support for increasing individual payments public.

But others questioned why anyone was focusing on Schumer’s lapses at all, given McConnell was blocking a vote to approve $2,000 individual aid payments that are sorely needed by a significant portion of the American population.

While a controversial Covid-19 aid bill weighing in at nearly $1 trillion was passed with much fanfare last week, the measly $600 payments it offered individuals were a source of outrage nationwide – and a meeting point for rare bipartisan agreement. Trump himself called for the payments to be raised to $2,000, even threatening to veto the massive bill if they were not – though he ultimately gave in and signed it on Sunday.

However, the Democrat-controlled House approved a measure to raise the payments to $2,000 on Monday, sending the bill to the Senate – where McConnell blocked the floor vote. While several Republicans have publicly pledged their support for the measure, their leader in the chamber has declined to make a move.

Vermont independent Senator Bernie Sanders may have outmaneuvered him, however. The Senate needs the two-time presidential candidate in order to smoothly override Trump’s promised veto of the NDAA – a veto the president insists he will deliver if the must-pass defense bill does not include stripping Big Tech of its Section 230 liability protection. Sanders warned he will object to the veto override, potentially filibustering legislation to hand the Pentagon the largest budget in history into the new year.