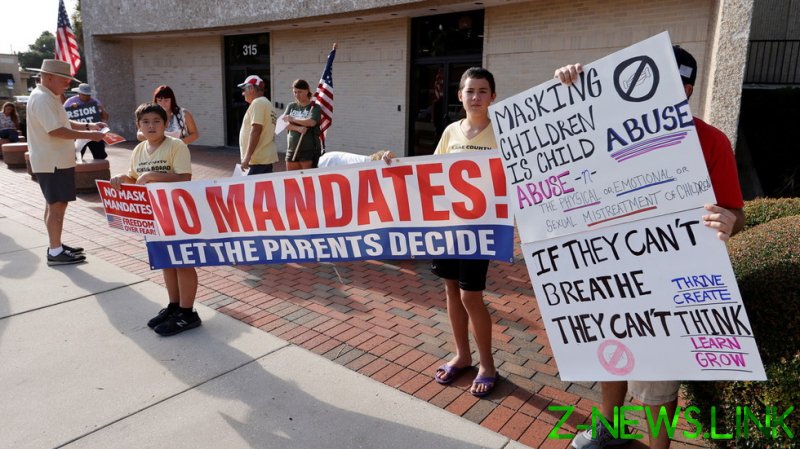 Brevard County Schools announced this week the mask mandate change was always part of its plan and comes as the county sees a reduction in Covid-19 cases this month.

“This is exactly how the mask mandate was supposed to be used,” the county school board chair, Misty Belford, said in the announcement.

The parental opt-out option has already gone into effect.

The announcement comes on the heels of a controversial story of a seven-year-old girl with Down Syndrome who was allegedly forcibly masked at her school.

State Representative Randy Fine (R-Florida) shared the alleged story from his district earlier in the week while blasting mask mandates being enforced. Florida Governor Ron DeSantis has also been opposing them.

According to Fine, the girl, whom he identified by name, had a mask tied around her face by teachers, and her parents were never contacted. She is also non-verbal.

“When her father saw her get off the school bus she was wearing a mask and it was tied around her head with nylon rope. The mask was full of saliva, the girl couldn’t breathe. Father is furious,” Fine said, going on to claim the father spoke to the school only to be told the same thing had been happening for weeks, and this was just the first time they forgot to remove the mask before sending the student home.

“There is a special place in hell” for those who forcibly masked the girl, Fine added.

The father has since set up a crowdfunding campaign and said he intends to sue the school district. Fine spoke to DeSantis about the situation this week. He said the governor had been motivated by Steel’s story to also seek criminal action against “school board members who refuse to follow the law.”

Brevard’s “parental opt-out” also follows school board member Jennifer Jenkins making national headlines earlier this month, when she detailed the alleged death threats she and her family have received over her support of mask mandates in schools.