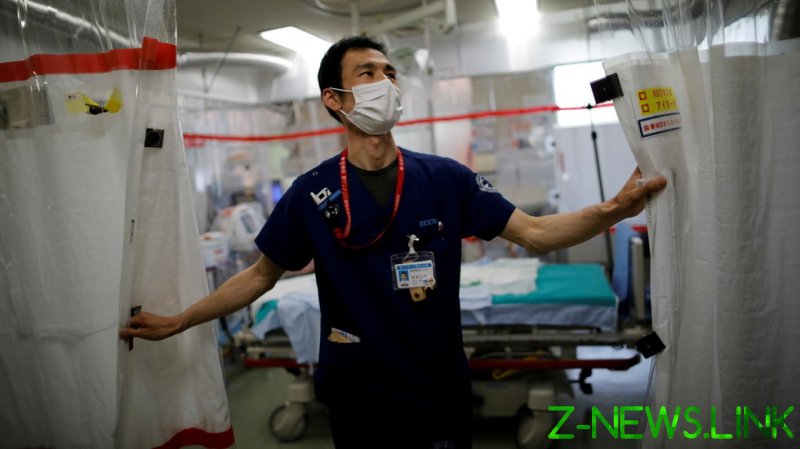 In mid-August, Japan experienced a peak in Covid-19 infections, recording over 23,000 new cases per day. Now the metric is just around 170, with deaths attributed to the disease mostly remaining in single digits this month.

The decline has been attributed by many to high vaccination rates, public acceptance of masks, and other factors, but some researchers say the drop was uniquely significant, compared to other nations with similar conditions.

Ituro Inoue, a geneticist at the National Institute of Genetics, believes that Japan had the good fortune of witnessing the Delta strain mostly rooting out other variants of the SARS-CoV-2 virus before then eradicating itself. He explained his team’s theory to the Japan Times newspaper this week.

For some time now, Inoue and his fellow scientists were researching mutations of SARS-CoV-2 and how they are affected by the protein nsp14, which is crucial for the reproduction of the virus.

RNA viruses, like the one causing Covid-19, tend to have a very high mutation rate, which helps them quickly adapt to changes in the environment. However, this opens the door for a so-called “error catastrophe,” when bad mutations pile up and finally cause the full extinction of a strain. The protein nsp14 appears to offer a form of error proofreading that helps the virus genome to stay below the threshold of the “error catastrophe.”

In the case of Japan’s fifth wave of Covid-19, the Delta variant’s nsp14 failed at this job, Inoue believes, based on the genetic study of specimens collected from June to October. Contrary to his team’s expectations, there was a lack of genetic diversity, while many samples had many genetic changes in the site called A394V, which is linked to the error-fixing protein.

“We were literally shocked to see the findings,” the researcher told the Japan Times. “The Delta variant in Japan was highly transmissible and [was] keeping other variants out. But as the mutations piled up, we believe it eventually became a faulty virus and it was unable to make copies of itself.”

The theory could be relevant to the previous SARS strain, which was identified in 2003, explaining why it didn’t cause a pandemic. But that would be hard to confirm, since the outbreak ended relatively quickly and didn’t result in the massive collection of genetic data necessary to test the hypothesis.

It’s not clear why Japan had this lucky turn of events, but nothing comparable happened in other East Asian countries like South Korea, where populations are genetically close to that of Japan. Virus mutations similar to those flagged by the scientists have been discovered in at least 24 countries, Inoue said. He and his team plan to publish a paper detailing their findings by the end of November.

Even if the natural extinction theory is confirmed, it is at best a temporary reprieve for the Japanese people. New, more successful strains are likely to eventually find their way into the country, though quarantine measures and immigration control could delay the emergence of new variants in Japan, Inoue believes.

Meanwhile, Tokyo is bracing for a new wave of Covid-19 this winter and is preparing to live with the virus. The government reportedly plans to ease travel restrictions by increasing the number of people it allows to enter the country per day from 3,500 to 5,000.