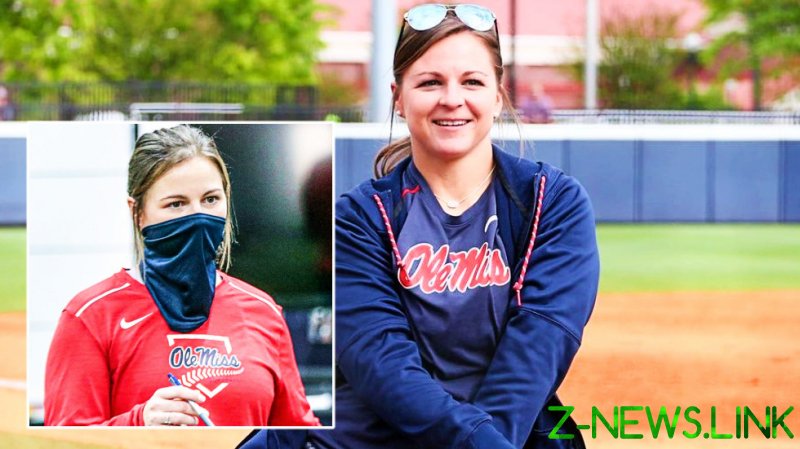 Working with a team known as ‘Hotty Toddy’, Katie Rietkovich Browder is a coach at the Ole Miss set-up who started a romance with a senior student-athlete behind the back of another senior teammate the player was dating, according to a report.

After discovering text messages that alerted them to the tryst, the scorned lover printed screenshots and taped them to the coach’s computer, podcast Running Poles’ blog has claimed.

Browder is said to have been married in December 2019, shortly before joining the institution.

The head coach of the team, Jamie Trachsel, is alleged to have been informed of the situation before bribing the students to keep quiet with ‘scholarship money’.

A Title IX investigation – which relates to sexual harassment and sexual violence violations of university policy – has been launched against several members of the coaching team, according to widespread reports.

Running Poles said that 13 people connected to the program have confirmed that the investigation is underway.

Complaints are said to have been formally made to the institution’s equal opportunity and regulation body and regional and national bosses.

The outlet also claims to have obtained a letter sent to the Athletic Director on July 29 reporting that Trachsel “created and embraced a mentally toxic culture.”

The complaint is also said to have accused Browder and Trachsel of making remarks about conservative-minded’ players, with Browder allegedly telling a Zoom call with team officials: “If my wife or other people in my family voted for [Donald] Trump, then all they would be doing is hurting me.”

Trachsel reportedly told the group that she had switched from Republican to Democrat allegiances, adding in a conclusion that allegedly made some of her audience feel like they were being pressured: “So you really want to make sure that you don’t go with the wrong party.”

Browder appears to have been a popular appointment when she rejoined the team last year.

One admirer wrote: “This makes my heart happy. Can’t wait to see what the future brings.”