Home / WORLD / Save us, Big Brother! Ever-shifting Covid-19 guidance is designed to make you beg for dictatorship

Save us, Big Brother! Ever-shifting Covid-19 guidance is designed to make you beg for dictatorship 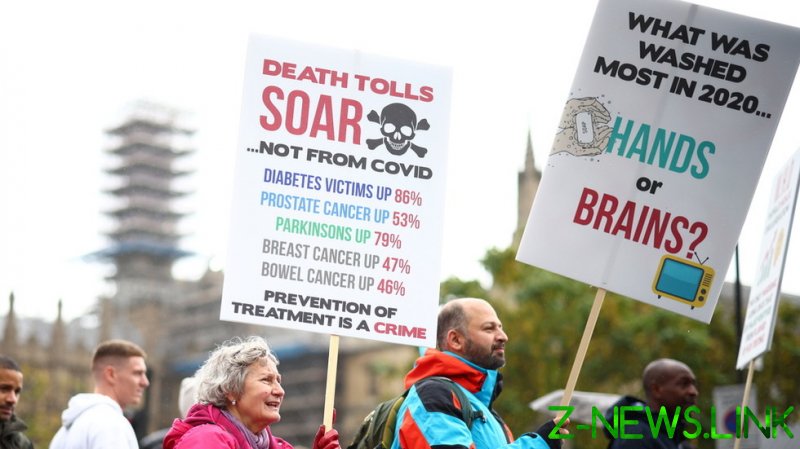 “All I want for Christmas are Covid-19 mandates,” Washington Post columnist Kate Cohen wrote as the holiday loomed on the horizon last week. Seemingly terrified that Americans’ festive habits might overtake their pandemic-inculcated learned helplessness for a few days and unwilling to “allow” people to celebrate in peace, Cohen spoke for the burgeoning Snitch Nation, begging for more rules to follow — and an iron fist to enforce them on the disobedient.

Lamenting that Americans “have been left to regulate ourselves,” Cohen whines “why don’t we just follow the rules?” Even as she admits those rules have been changing rapidly and illogically for months, she demands more of them, embodying the threadbare old joke about how “the food was terrible – and such small portions!”

“Please, mandate masks in public indoor spaces and enforce the mandate,” she pleads, not content with President-elect Joe Biden’s promise to request Americans wear masks for the first 100 days of his term or with her own slavish rule-obeying. “Close the places where we gather indoors against our (or our families’) better judgment…Restrict gatherings and travel and enforce those restrictions,” she continues, spinning a sadomasochistic fantasy.

“In other words, make us behave as though we are still in the midst of a massive public health crisis in which thousands of Americans are dying every day.” Translation: ‘Tread on us. Harder!’

Never mind that a Portuguese court recently ruled that the ‘gold-standard’ PCR method of testing for Covid-19 is scientifically worthless and a growing number of scientists have called for the retraction of the paper it’s based on due to conflict-of-interest-riddled, warped data. Keeping the national fear level at ‘red’ is what’s really important — and that requires a constant stream of new rules, the more Kafkaesque and contradictory the better.

It’s not enough for the lockdown-lovers of the world to merely stay home, Cohen makes clear. Rules — ironclad, unbendable rules ‑ must be put in place to ensure everyone stays home. The thought that someone, somewhere might not be living in abject terror is enough to keep Snitch Nation up at night. Forbes contributor Calvin Mackie agreed, literally accusing Americans of “loving their families to death” three days before Christmas. How dare they want to spend time together when the warm inviting glow of the television belching out apocalyptic numbers beckons?

There remains no proof that lockdowns prevent mass death, and even the World Health Organization has begun advising against them, admitting they are “making poor people a whole lot poorer”. Yet the charade must continue, as so much has been sacrificed over the last 10 months that to give up on this massive psychological experiment would mean admitting the decision to commit economic seppuku worldwide was misguided at best. The aim now, according to Mackie, is “behavior modification.” Forget the evidence of our senses and scrap your instincts — trust only the figures emerging from the Johns Hopkins Institute.

Cohen inadvertently gives away her real aims while chiding New York Governor Andrew Cuomo for “leaving it to us to police ourselves.” Sneering at his claim that “New Yorkers are smart” and thus “learn[ed] from Thanksgiving” (which didn’t produce the catastrophic death spike everyone was predicting, but who’s counting?) she asks the reader to “hang on a minute while I go check the Internet for evidence of people getting smarter.” The ever-shifting regulatory ground beneath her feet has left her so uncertain about what reality is that she must “check the Internet” to confirm basic facts, even sarcastically.

This flux – the rapid-fire flip-flops between “masks are useless for ordinary people” and “wear a mask or you’re committing genocide,” between “no such thing as asymptomatic spread” and “drop everything and get tested now, even if you don’t feel sick,” is no accident. Only if we’re forced to constantly second-guess the reality of our lived experience can we be persuaded to drop our critical capabilities and unquestioningly embrace Big Brother.

US coronavirus czar Dr. Anthony Fauci, for example, has been embraced by Americans, not just as a soothing velvet glove over the iron fist of corporate-state power, but even as a sex symbol. This popularity comes despite (or perhaps because of) Fauci’s self-admitted tendency to lie. The career health official recently boasted he’d repeatedly nudged the figure of how many Americans would have to be vaccinated in order to achieve herd immunity upwards, responding to what he perceived as growing nationwide trust in the vaccine. Republican Senator Marco Rubio — not typically a big fan of the truth himself — reminded Fauci he’d also “lied” to the American public about masks in the early days of the pandemic.

But Fauci’s fictions are delivered with such confidence that they reassure terrified Americans all the sacrifices they’ve made are worthwhile. A comforting falsehood is preferable to the unpleasant truth, especially during times so uncertain that one must rush to the internet to look up basic facts in case they’ve changed overnight (as the WHO did with its definition of “herd immunity”). Orwell’s memory hole is alive and well, and it takes a huckster like Fauci to trick the people into believing this is a good thing.

Thus even as Pfizer and Moderna admit their vaccines may not stop the transmission of the novel coronavirus, Snitch Nation will cling to the false narrative that “anti-vaxxers” are responsible for the delay in the implementation of the pharmaceutically-enhanced “new normal” in which international travel and large gatherings are permitted once more (for those who have the right apps on their phones, that is). After all, “everyone is excited about the pipeline of multiple FDA approved vaccines,” according to Mackie at Forbes. Surely you wouldn’t want to be excluded from “everybody”? Pay no attention to the thousands of incapacitating adverse reactions that surfaced in the first four days of Pfizer-BioNTech’s vaccine rollout, or Pfizer’s long string of government-imposed fines for fraudulent marketing, one of which broke a record.

No one should force those petrified of Covid-19 to step out of their bubbles and return to their normal lives, of course. Everyone has a different comfort level — whether it’s partying down in a bikini amid the snowdrifts or curling up by the fire at home with some establishment-produced fear-porn.

But the lockdown fetishists have no right to impose their delusions on those who’d rather return to normal life either. If reverting to the “old normal” was truly as impossible as the media establishment claims, there would be no reason for them to scream themselves hoarse denying the possibility. Americans need only decide they are ready to stop living in fear.