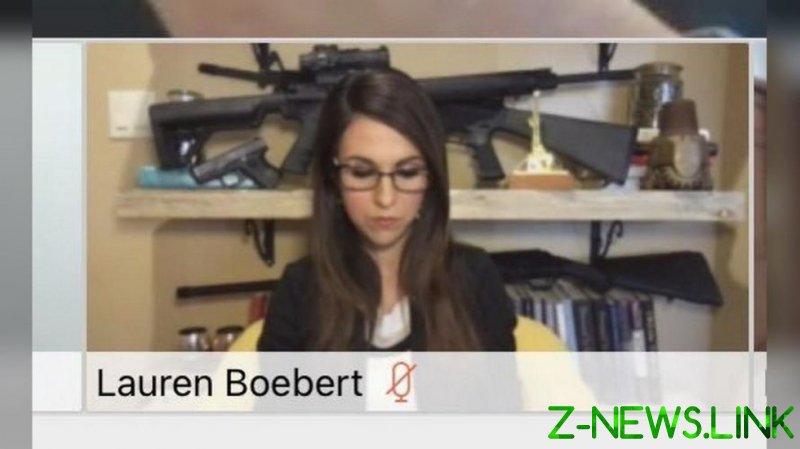 It was Rep. Katie Porter (D-California) who kicked off the whole thing on Thursday, reporting Boebert to the ‘Room Rater’ account on Twitter for having a “dangerous” background during the House Natural Resources Committee hearing via Zoom.

Boebert, the married mother of four, glossed over the insult but shot back: “Who says this is storage? These are ready for use.”

When someone else claimed the rifles weren’t even loaded, Boebert posted a photo that proved them wrong.

Democrats online were mostly horrified by the display of weapons, but some chose to counter it with their own shelf displays, using feminine hygiene products.

Meanwhile, Boebert was hailed as a hero by some conservatives. Turning Point USA’s Benny Johnson called her “savage backdrop” an “epic defense of the Second Amendment,” the provision of the US Constitution that guarantees firearm ownership.

Former Marine bomb technician turned Fox News pundit Johnny Joey Jones, however, criticized Boebert’s shelf display as “tacky/insincere” and “lazy,” saying she should do her calls in front of a room of properly stowed guns – like his own.

As much of the nation’s business moved to virtual platforms such as Zoom during the almost year-long Covid-19 lockdowns, setting up bookshelves and other backgrounds for the calls has become somewhat of an art form.

There are even shower curtains printed to look like bookshelves, that some public figures have allegedly used instead of the real thing.

Boebert was elected to Congress last November and is a proud Second Amendment advocate. She owns a restaurant called Shooters Grill in the Colorado town named Rifle, and has insisted on carrying a pistol in the Capitol, to the fury of Democrats who accused her of making them feel “unsafe.”