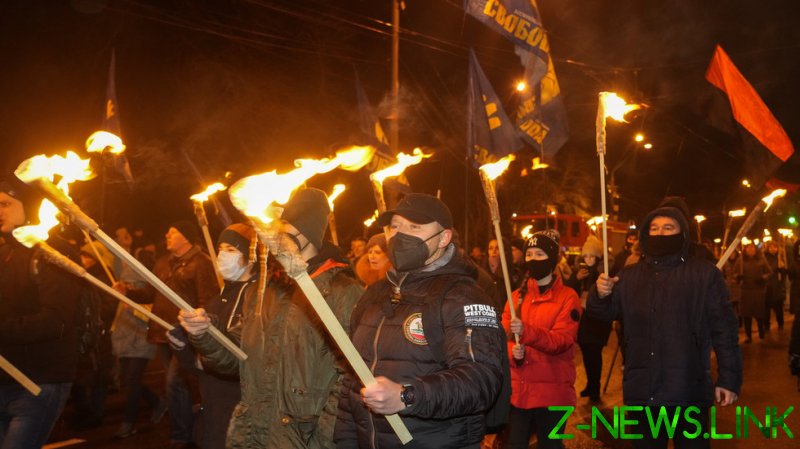 A top Russian legislator has called for a pan-European response to the glorification of Nazism in Ukraine, after far-right activists held a torch-lit march in Kiev marking the birthday of a controversial WWII Hitler collaborator.

The rally to celebrate Stepan Bandera, held in Ukraine’s capital over the weekend, has been condemned by State Duma Chairman Vyacheslav Volodin. It also drew the ire of the Israel, which described it as an “insult” to victims of the Holocaust

“It is unacceptable when, in the 21st century, Nazi leaders are glorified again, those who organized atrocities, were Nazi collaborators, burned villages to the ground, killed elderly people, women, children and babies,” Volodin wrote in a Telegram post.

European countries must come with a unified response to the resurgence of ultra-nationalism in Ukraine and elsewhere, Volodin stressed, mulling the idea of slapping Kiev with sanctions for allowing such events. The country is “increasingly sliding toward a state based on a nationalist ideology,” he added.

“What is happening in Ukraine must be condemned by the European Parliament, PACE [the Council of Europe] and the OSCE PA. Its leadership must be held accountable for the promotion of nationalism, sanctions must be imposed, everything must be done to stop its resurgence in Europe,” Volodin stated, promising to raise the issue with European lawmakers during upcoming inter-parliamentary meetings. 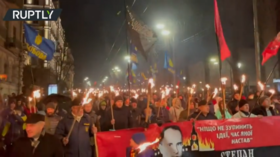 Those overlooking such a trend in Ukraine must be held accountable as well, the official said. While Volodin did not mention anyone in particular, he said it was “horrifying” that some “NATO countries” have been supplying weapons to Ukraine despite its far-right drift.

Thousands of Neo-Nazi activists took part in the torch-lit march on Saturday night, as they marked the birthday of Stepan Bandera, a former leader of the Organization of Ukrainian Nationalists (OUN). The insurgent group, responsible for massacres of ethnic Poles, Jews, and Russians, was aligned with Hitler’s Germany during WWII.

Nazi collaborator Bandera is regarded by Ukrainian nationalists as a ‘hero’ who strived to create an independent Ukrainian state. He was assassinated in Munich, Germany in 1959 by a Soviet agent in retaliation for the OUN’s war crimes.

The glorification of those who supported Nazi ideology, insults the memory of the victims of Holocaust in Ukraine,” Israel’s Embassy in Kiev insisted in a Facebook post. However, so far there has been no official reaction to the pro-Nazi march from either the EU or the US.