Home / WORLD / ‘Same math used to count supporters?’ Biden says over 350 million Americans have been vaccinated… in a nation of 331 million

‘Same math used to count supporters?’ Biden says over 350 million Americans have been vaccinated… in a nation of 331 million 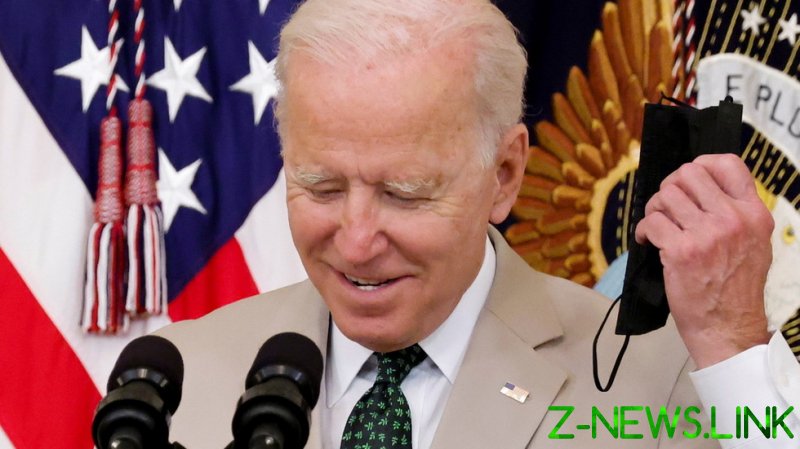 Biden stated the grossly erroneous number at least twice on Friday in a press briefing at the White House. In one case, he even checked his notes, saying, “Well over – what’s the number again? – I’ll remind myself… 350 million Americans have already been vaccinated. They’re doing fine.”

The president may have meant to say that “well over 350 million” doses have been given, though that wouldn’t be exactly right, either. The latest data from the Centers for Disease Control and Prevention (CDC) shows that just under 349 million doses have been administered. Two of the three vaccines authorized for emergency use in the US require two doses for inoculation.

Social media users marveled that Biden could look at the number in his notes and state it as fact without realizing that it far exceeded the total population – especially in the context of calling for more people to be vaccinated. Not only is the US population 19 million lower than Biden’s vaccination claim, but the number of people eligible is about 67 million lower, because none of the jabs is approved for use in children under 12 years old.

Biden is no stranger to verbal gaffes, including many involving bizarre math. While campaigning for president in June 2020, he said America had lost 120 million lives to Covid-19. He corrected that blunder, saying he meant 120,000. During a Democratic primary presidential debate in February, he said that 150 million Americans had died from gun violence since 2007. CDC estimates show there are fewer than 40,000 deaths annually from gun violence, and most of those are by suicide.

Last September, Biden falsely claimed that 6,114 members of the US military had died from Covid-19, and 118,984 had been infected. At the time, there had been seven such deaths and fewer than 79,000 infections.

Biden previously confused the number of vaccinations with the number of doses administered, saying in May that 230 million Americans had been inoculated against Covid-19. The correct number at the time was 106 million. Currently, 165.5 million Americans have been fully vaccinated, or 49.9% of the population. At the same May event, Biden also made a false statement about there being “virtually no difference” in vaccination rates in different racial categories.

Starbuck was among many observers who alluded to Biden’s allegedly overstated voter support. Another commenter posted a series of incorrect figures that have been stated by the president, adding “81 million Americans voted for Joe Biden.”

Nearly three in 10 Americans, including 28% of independents, still believe that last November’s presidential election was “stolen” from Donald Trump, according to a Yahoo News/YouGov poll that was released earlier this week.

Critics of the president surmised that mainstream-media reporters wouldn’t challenge or question Biden’s latest Covid-19 blunder. In fact, CNN apparently tried to help clean up the mess, attributing to Biden the accurate numbers of Americans who have received at least one jab and those who have been fully vaccinated.