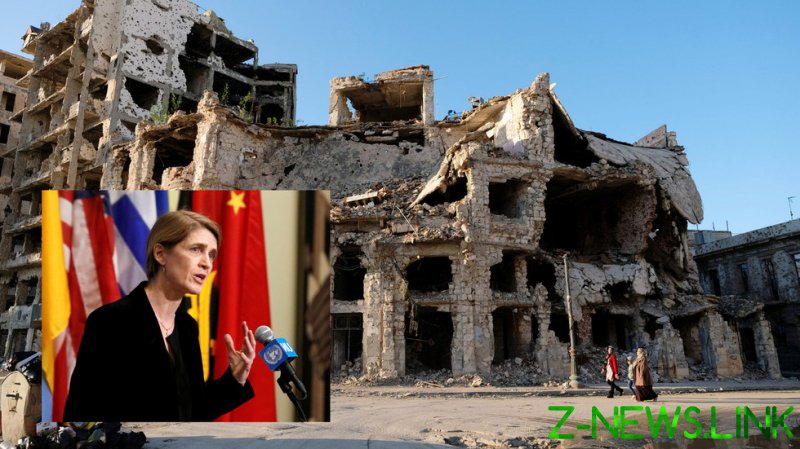 Power has officially been tapped as head of the US Agency for International Development (USAID), a soft-power cutout allegedly used by US intelligence to enact regime change and other questionable dealings under cover of administering humanitarian aid or “promoting democracy.”

USAID, an ostensibly independent agency with ties to the State Department, is notorious for pouring taxpayer dollars into “civil society” groups in countries where Washington-backed ‘revolutions’ subsequently germinate, whether it’s Nicaragua, Venezuela, Ukraine, or elsewhere.

In taking up leadership of the agency, Power would effectively be picking up where she left off as ambassador to the United Nations under Barack Obama, traveling around the world to “fix” what the US has broken over the last few decades and helping to topple any leaders who try to stand in the way.

Under Obama, the US didn’t just launch an unprecedented number of drone strikes. Thanks to the “responsibility to protect” doctrine Power helped create, in which military intervention is “justified” by the mere potential of genocide or mass slaughter, the commander-in-chief’s hands were freed to start wars without even the fig leaf of Congressional approval. Recasting acts of war as acts of humanitarianism was a stroke of brilliance, if a supremely evil one, and epitomized the double-standard the US has set for itself and NATO versus the rest of the world.

Based not on a congressional vote but on a UN resolution, the US jumped into the disastrous war with Libya in 2011, following Power’s recommendation to declare a no-fly zone under the bogus rationale that leader Moammar Gaddafi was going to slaughter his own people. Power’s “responsibility to protect,” a.k.a. military virtue-signaling, allowed Washington to lay waste to what had been the most advanced country on the African continent before its leader committed the unforgivable crime of suggesting African nations sell their oil under a new gold dinar currency. Propagandists skilled in the lurid art of atrocity-porn were deployed to divert the world’s attention to the Libyan leader’s supposed proclivity for feeding his soldiers Viagra so they could rape more helpless civilians.

Coupled with such cartoonish depictions of evil, Power’s deft sleight of hand at turning illegal wars of aggression into warm fuzzy “humanitarian bombing” proved a great gift to the Obama presidency. Congress’ sign-off, previously required to take the US to war, had become superfluous. Unsurprisingly, she was a major proponent of taking the Libya approach in Syria, where the Obama administration instead focused on training “moderate” rebels with ties to the same Islamic State (IS, formerly ISIS/ISIL) and al-Qaeda head-choppers Washington was supposedly fighting, and appears to have taken great creative liberties regarding her support-turned-opposition to the US-backed Saudi war in Yemen.

Former President George W. Bush may have started the ill-advised war on terror that has shredded the Middle East and bankrupted the US both literally and morally, but he at least made a show of wrangling approval out of a spineless, neutered Congress. Armed with a Nobel Peace Prize, Obama continued bombing Afghanistan and Iraq and expanded the combat theatre to five more countries before his second term was over – bombing more nations than any other US president since World War II.

While the term “responsibility to protect” has not crossed the lips of the Trump administration – President Donald Trump wouldn’t be caught dead praising an Obama-era policy – the paradigm of “bomb first, ask questions later” has remained very much in effect. Trump broke Obama’s records in terms of airstrikes ordered and civilians killed, and very nearly took the US into war with Iran, ordering the airstrike that killed Iran’s Quds Force General Qassem Soleimani without bothering to clear it with Congress first.

Power made it clear in a recent Foreign Affairs article that her convictions have not shifted – it’s Trump’s blunt aesthetics, not his affinity for bombing countries that don’t pose a threat to the US, that she disdains. She calls for the US to demand a certain level of anti-corruption measures from any country seeking preferential trade agreements, as if the US (and particularly her new boss) has a moral leg to stand on regarding corruption. Power even name-drops the Global Magnitsky Act, named after the tax adviser of notorious scam artist Bill Browder, as if daring the reader not to laugh.

But reading between the lines of that lengthy paean to American exceptionalism, it’s clear her sudden interest in international corruption is rooted more in the surge in anti-corruption protests around the world than any sincere concern. As leader of USAID, she will be tasked with finding and exploiting weak spots in target states through the “civil society” groups the agency bankrolls. And if that means pretending to care about corruption while working for an administration that’s soaking in it, so be it. Power didn’t win an award from Henry Kissinger himself for having morals or ethics.