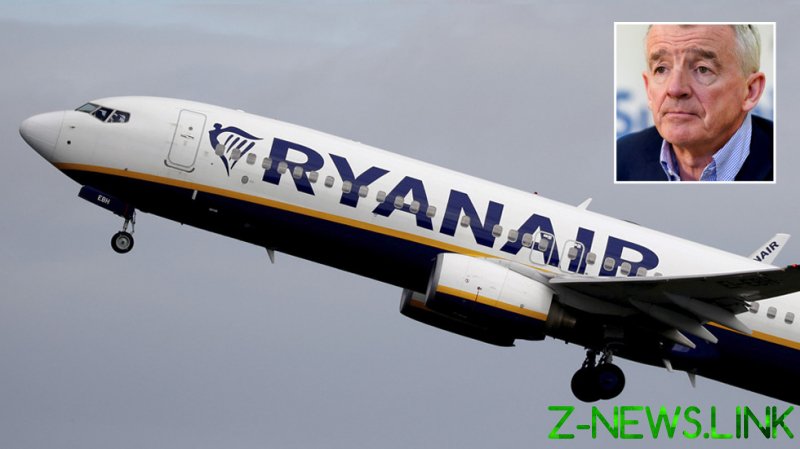 Speaking to Dublin’s Newstalk radio on Monday, Michael O’Leary took aim at officials in Minsk, and even suggested that KGB agents from Belarus were onboard the aircraft.

On Sunday, a flight from Greece to Lithuania was forced to land due to a supposed bomb threat. The plane was escorted to Minsk airport by a Belarusian MiG-29 fighter jet. Once it landed, police came onto the aircraft and arrested passenger Roman Protasevich, the former editor-in-chief of opposition Telegram channel Nexta. He currently an employee of Belamova, an outlet founded by Igor Losik, a consultant for US state-run media RFE/RL. Both are on Belarus’ list of extremist organizations.

“This was a case of state-sponsored hijacking … state-sponsored piracy,” O’Leary said. “It appears the intent of the authorities was to remove a journalist and his traveling companion … we believe there were some KGB agents offloaded at the airport as well.”

Later on Monday, an official statement from the Ryanair Press Office condemned the forced grounding, and noted that the airline would fully cooperate with the EU and NATO.

“Ryanair condemns the unlawful actions of Belarusian authorities who diverted Ryanair’s flight FR4978 to Minsk yesterday, which was an act of aviation piracy,” it said.

However, despite decisions by other airlines like Latvia’s airBaltic to stop flying over the country, Ryanair is still using Belarus’ airspace.

In Minsk, the Belarusian Ministry of Foreign affairs disagreed with the assessment that the grounding was illegal.

“There is no doubt that the actions of our competent authorities were also in full compliance with the established international rules,” ministry spokesman Anatoly Glaz said. “There is a deliberate politicization, unfounded accusations, and sticking labels. However, there is no apparent desire to objectively investigate.”