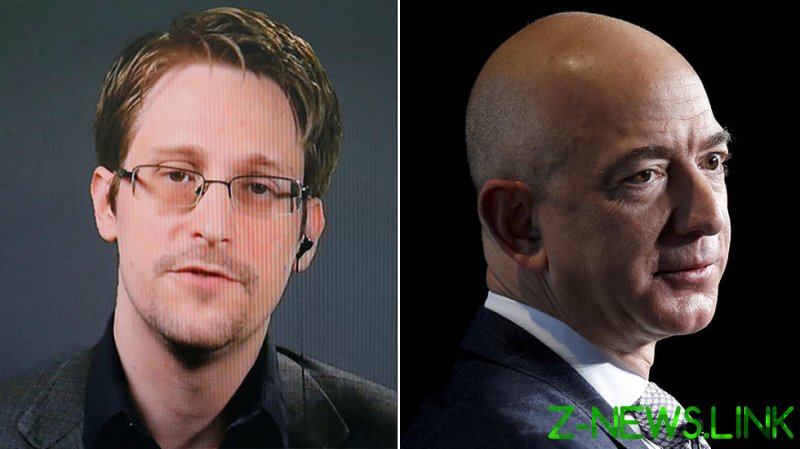 The fugitive whistleblower and privacy advocate dunked on one of the world’s richest people on Twitter over his reported new toy, a $500 million yacht that is set to break several records once it is finally delivered next year. The super-posh vessel made headlines last month after images of it were released in the Netherlands.

Dubbed Project 721 or Y721, the yacht is being built by the shipyard Oceanco and was recently towed via rivers from Zwijndrecht, Belgium to Alblasserdam in the Netherlands. While widely linked to Bezos, it has not been confirmed that he actually commissioned it.

Snowden expressed his disappointment that the Amazon founder was seemingly spending some of his immense wealth on a “boring baby cruise ship.”

“You could construct vertical gardens the size of skyscrapers—in the greatest cities of the world. You could colonize the ocean floor! Nothing is impossible,” he mused.

Snowden also posted a screenshot from the video game series Bioshock, which features an underwater city funded by an idealistic tycoon. It appeared to be a sarcastic suggestion, considering the game’s fictional city of Rapture ultimately fell to division, chaos, and tyranny.

Bezos famously belongs to a very small club of billionaires who can afford to have private space programs. Critics say his Blue Origin company, which seeks to turn suborbital flights into a form of entertainment for the affluent, looks more like a vanity project. This is reinforced by the fact that the spacecraft developed by the firm has a distinctly phallic shape.

While many people supported Snowden’s criticism of Bezos, others said he was free to do with his money what he pleased. Some pointed out that he does fund other less boring projects, like the Clock of the Long Now, a giant mechanism designed to measure time over 10,000 years. A full-scale prototype is being constructed inside a mountain on Bezos’ land in Texas, and he reportedly invested $42 million into the project.