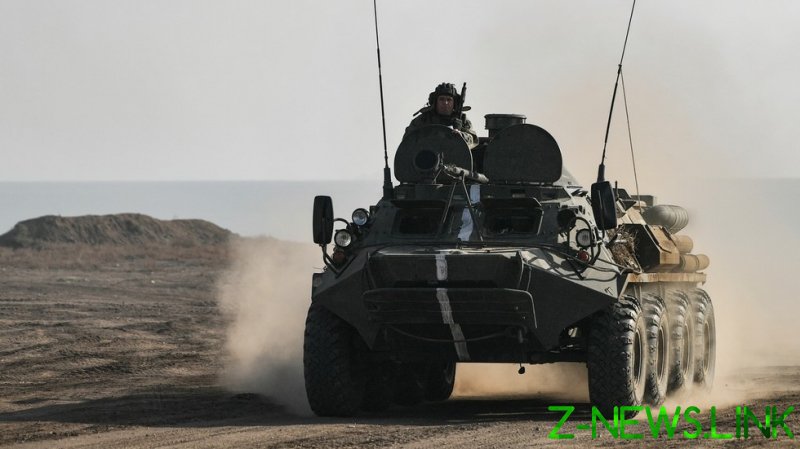 Russian Foreign Minister Sergey Lavrov met with his US counterpart, Secretary of State Antony Blinken, in Stockholm, Sweden, during a summit of the Organization for Security and Co-operation in Europe, to discuss the growing crisis surrounding Ukraine. The two diplomats would be reporting the results of their discussions back to their respective leaders, with Blinken noting in a press conference on Thursday that US President Biden and Russian President Putin “may have the opportunity to speak directly in the near future.”

Until that time, Blinken noted, the onus was on Russia to defuse the situation regarding Ukraine. “It’s now on Russia to de-escalate the current tensions,” Blinken declared, “by reversing the recent troop buildup, returning forces to normal peacetime positions, and refraining from further intimidation and attempts to destabilize Ukraine.”

While Blinken’s comments would appear to underscore the seriousness of the situation, the reality is that the current imbroglio over allegations of Russian troop movements along its border with Ukraine is little more than a tempest in a teapot, a war of words driven by Washington and the American media. Meanwhile, Kiev now seems to be attempting to play down the situation, as President Volodymyr Zelensky didn’t mention the alleged troop buildup in his annual address to parliament and admitted direct talks with Russia were necessary “to stop the war.”

The current crisis started with US media reports claiming American officials had warned their European counterparts that Russia might be planning an invasion of Ukraine. It further escalated on November 20, when Brigadier General Kirill Budanov, the head of Ukraine’s defense intelligence agency, briefed members of the press that Russia had amassed more than 92,000 troops along its border, and was preparing to invade between the end of January and early February.

When pressed for details about this buildup, Ukraine sang a different tune, noting that Moscow had kept about 90,000 troops “not far” from the Russian-Ukraine border following the completion of training exercises conducted in the fall. In particular, the Ukrainian Defense Ministry noted, units of Russia’s 41st Combined Arms Army were observed in a garrison near the town of Yelnya, some 160 miles (257km) north of the border. Ukrainian officials also accused Russia of having deployed more than 2,000 troops into the Donbass region in support of pro-Russian militias.

Nonplussed by facts, the Biden administration expressed its concern over what it termed Russia’s “large and unusual” military buildup along its border with Ukraine, noting that this issue would top Blinken’s agenda during his meetings at a summit of NATO foreign ministers in Riga, Latvia on November 30 and December 1. According to the US State Department’s most senior official with regard to this issue, Assistant Secretary of State for European and Eurasian Affairs Karen Donfried, “all options are on the table and there’s a toolkit that includes a whole range of options.” Donfried told reporters Blinken would be discussing these options with his NATO counterparts while in Riga.

Following these meetings, Blinken spoke to the assembled press corps. “We [NATO] don’t know whether President Putin has made the decision to invade [Ukraine],” he said. “We do know that he’s putting in place the capacity to do so in short order, should he so decide. So, despite uncertainty about intention and timing, we must prepare for all contingencies, while working to see to it that Russia reverses course.”

Normally, when a secretary of state speaks of “all contingencies,” it is accepted as code for the possibility, even probability, of military action. Blinken quickly explained, however, that he was intimating no such thing. “We’ve made it clear to the Kremlin that we will respond resolutely, including with a range of high-impact economic measures that we’ve refrained from using in the past,” he said, leading to speculation that the US was considering cutting Russia off from the SWIFT system of international transfers. But this has been proposed as a potential sanction since 2014 over Moscow’s alleged role in the Donbass conflict. Since then, Russia has developed an alternative to SWIFT called SPFS, as well as its own card payment system, Mir.

“I’m not going to spell out today the specifics,” Blinken said. “We will probably, in time, share that with Moscow, so that they can understand fully what’s at risk, what the consequences would be if they commit further aggression against Ukraine. … We will work through all the details with our partners and allies.”

Building on that sentiment, NATO Secretary General Jens Stoltenberg, responding to a question as to whether military options would be on the table if Russia invaded Ukraine, noted, “Ukraine is not a NATO member, and therefore does not have the same security guarantees as NATO members, who have a commitment to come to each other’s defense if one member is attacked.”

However, he said, Ukraine could become a NATO member “when the 30 allies agree that Ukraine meets NATO standards,” adding that this was an issue “for the 30 allies to decide, not for Russia to decide.”

For his part, Lavrov, speaking ahead of his meeting with Blinken, declared, “We [Russia] have faced accusations over drills by the Russian armed forces, which Russia holds on its own sovereign territory, by countries that are moving huge numbers of troops and military equipment from across the ocean toward our borders.” The foreign minister added that Russia, far from seeking to provoke a crisis, had advocated negotiations with the US, NATO, and Ukraine that focused on agreements and consensus-based solutions.

President Putin, speaking separately, underscored his intent to obtain assurances that NATO would not seek to expand eastwards into Ukraine or deploy weaponry close to Russia’s borders. Such actions, he noted, would be considered “red lines” by Russia, and responded to as such. When asked about Putin’s remarks, Blinken said they would be considered “a bad joke, if things weren’t so serious.”

But the real joke is on Blinken, Stoltenberg, and those responsible for formulating what passes as policy regarding NATO. To sum up the situation to date: American media accused Russia of planning an invasion, citing as evidence the existence of a garrison located 160 miles north of the border, and Kiev fell into line. The US and NATO expressed grave concerns over this “buildup,” noting that Russia could invade Ukraine “in short order.”

The US then threatened that “all options” were “on the table,” before clarifying that only economic sanctions were being considered. The head of NATO, after echoing US concerns over Russia’s aggressive military posture, underscored the reality that, because Ukraine was not a member of the alliance, the military bloc would not come to the defense of Ukraine should Russia invade. In short, NATO will not defend Ukraine from a Russian invasion that exists only in the imagination of Ukraine, the US, and NATO.

Lastly, the Russian foreign minister and the US secretary of state are to meet to discuss this “crisis,” agreeing to bump the matter up their respective chain of commands. The result will be a phone conference between Presidents Biden and Putin, during which the issue of halting NATO expansion into Ukraine will be on the table as a possible solution to a crisis that was manufactured by the West to begin with. Speaking on Friday ahead of the planned talks, Biden stated that he would not accept Moscow’s “red lines” warning.

Someday international-relations students will scratch their collective heads, wondering what, if anything, was going through the minds of those responsible for the current crisis. In any other circumstance, this sort of narrative would be fodder for dark comedy. However, the irrational fears and knee-jerk reactions involved are all too real, and, as such, represent a situation that Russia simply cannot ignore.