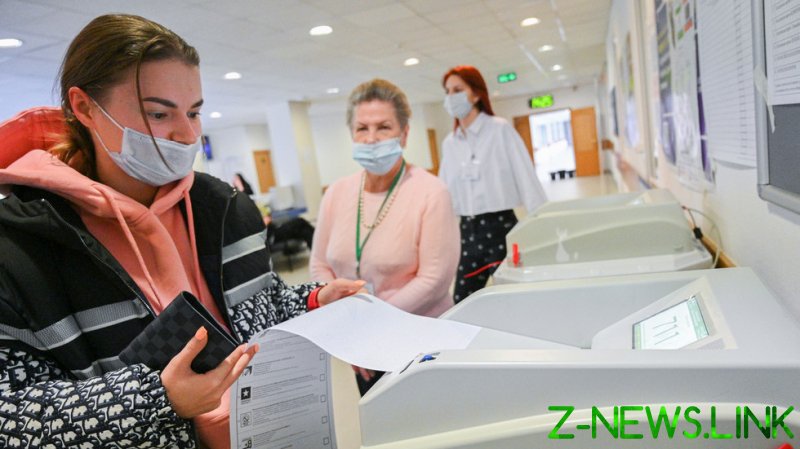 As the final ballots were recorded in Kaliningrad, the country’s westernmost region, a federal exit poll conducted by  research agency INSOMAR found support in United Russia, which attracted more than half of votes in the 2016 election, may have waned. Sampling a total of 438,218 people across 1,455 polling stations, it estimates that the party of government has attracted around 45% of the vote, some 10% lower than last time round.

The Communist Party of the Russian Federation (KPRF), however, appears to be set to make substantial gains, with pollsters predicting it may have secured just over 21% of the vote – up from 13% in the previous election. This could mean that United Russia is able to form a government without depending on other parties for support, but that it may lose its so-called super majority that has allowed it to pass constitutional reforms unopposed.

With fewer than one in ten votes counted, United Russia was on around 38%, according to preliminary results announced by the Central Election Commission. The grouping, which is openly backed by President Vladimir Putin, is followed by the KPRF on 25% and the far-right LDPR on 9%. ‘New People’, a center-right faction contesting its first election has so far polled at 7%, with the leftists of Fair Russia on 6%. Liberal, Western-leaning Yabloko is below 1%. Russia’s hybrid system, involving both ‘first past the post’ and proportional representation makes it difficult to predict how these results might be translated into parliamentary seats.

Organizers also said that the turnout at the election had reached 45.15% as of 6pm Moscow time. Fourteen parties, as well as a host of independent candidates, are vying for 450 seats in the eighth convocation of the State Duma. In addition to the local races in constituencies across the country, those that surpass a 5% threshold will also be allocated seats based on proportional representation in the lower house of the Russian parliament.

United Russia, which has described itself as President Putin’s ‘team’ in the Duma, has dominated the Russian political scene since 2003. It held 343 of the 450 seats in the last parliament. This time around, its list was headed by Defense Minister Sergey Shoigu and Foreign Minister Sergey Lavrov.

Voting has been underway since Friday dawned in the Far East, and closed late on Sunday at polling stations in Western Russia and the country’s embassies abroad. Residents of Moscow and six other Russian regions were also able to cast their votes online through blockchain-based electronic voting, employed for the first time at such a high-level election.

Counting of votes will continue throughout the night.