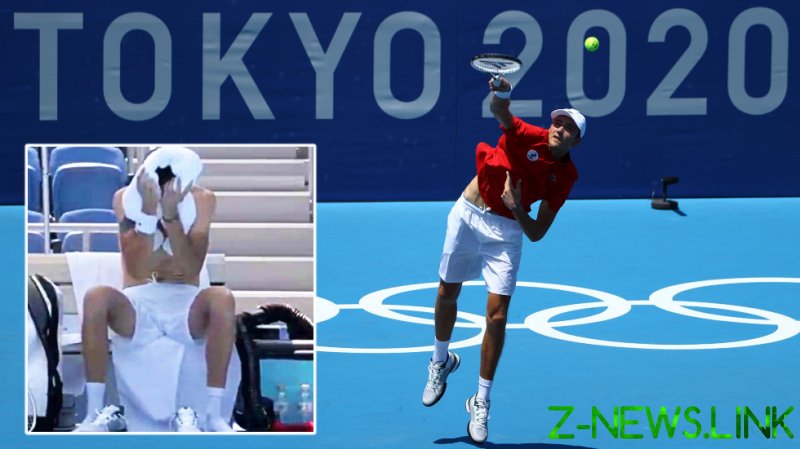 Soaring temperatures in Tokyo have led to Medvedev questioning why the Olympic event affords players just a 60-second changeover period compared to the regular 90 seconds amid blazing conditions and oppressive humidity, leading to several players stripping off courtside and showering themselves with bottled water in a bid to cool down.

Medvedev was one of those who appeared to feel the heat during his first round match against Kazakh Alexander Bublik, removing his shirt and covering himself with a cold towel.

Medvedev’s compatriot, Anastasia Pavlyuchenkova, was another who appeared to struggle in the conditions, and was seen attempting to regulate her temperature with the help of a tube blowing out cold air.

Reacting to the situation players are being faced with following his straight sets win against Bublik, Medvedev called on Olympics tennis authorities to reschedule matches to cooler periods of the day and for them to allow players lengthened changeover times after describing the heat during his win as “some of the worst” he has experienced in his career.

“I don’t think they are going to change anything in the middle of the tournament but that’s what can be done,” Medvedev said.

“I think the fact that we have only one minute between the changeovers is a joke. It should be 1:30, like it is in other tournaments.”

However, Medvedev also acknowledged that the conditions are the same for each player – and ultimately they have to get on with things.

“You have to play. That’s the Olympics – you go for the medal. You are not here to cry about the heat,” he added.

Pavlyuchenkova, meanwhile, was also highly critical of the conditions players are dealing with, saying: “You’re just not feeling great. So I wasn’t enjoying it at all.

“Every time I had to take the ice pack or ice towel, it wasn’t cold at all. They expected the heat and it wasn’t 100 percent ready for us.

“I feel a bit better but I just have a massive headache now. I think they somehow could have tried to make it a bit easier.”

Pavlyuchenkova added that the mechanisms in place to help keep players cool appear to be insufficient, with the tube she used to blow ice-cold air on herself affording little respite from the glaring sun.

“It’s not easy to find the right position because it’s just on the bench and somebody has to hold it so the air is blowing on you. I don’t think it was well prepared,” she said following her 6-0, 6-1 win against Italy’s Sara Errani.