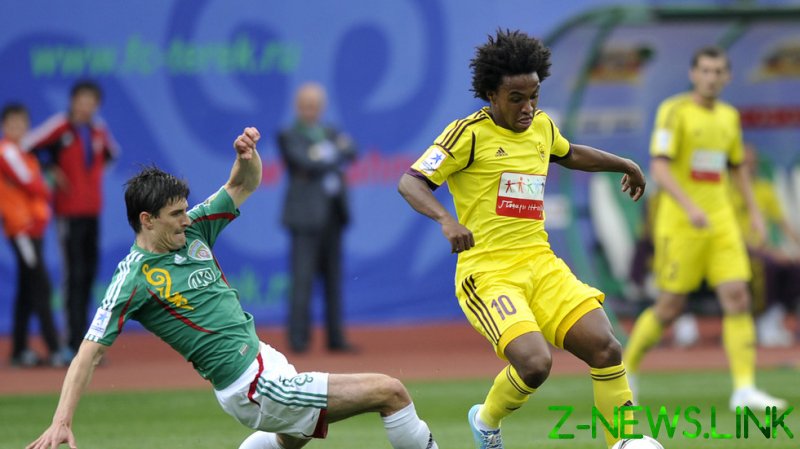 Anzhi Makhachkala, the Russian side who once boasted the likes of Samuel Eto’o, Willian and Roberto Carlos among their ranks, look set to fold after they were reportedly denied a license to compete in the third tier of Russian football.

According to a report by Russian Football News, the Dagestan-based team will cease to exist after they were refused permission to play in the FNL 2 – a situation which means that the club can no longer claim professional status.

A statement posted to social media by the club later confirmed the situation.

“The entire team of Anzhi made every possible effort to pass the licensing procedure and hoped for a positive outcome until the very end,” they said on VK.com, via translation.

“The club management understands the reasons for the refusal and adequately assesses the financial condition of the club. Every effort was made to pay off existing debts.

“Unfortunately, without the support of sponsors and partners, they were not enough.

“Anzhi would like to thank everyone who contributed to the history of the club’s development. Thanks to everyone who has been with their favorite team for many years and faithfully believed in the best. We say thank you to all the players, coaches, staff of the club and the staff of the team, who with honor and dignity represented the colors of Anzhi on the fields of Russia and Europe.”

This represents a remarkable fall from grace for the football club who pursued a series of high profile transfers between 2011 and 2013 under the ownership of billionaire Suleyman Kerimov.

Kerimov’s cash infusion saw Anzhi finish in third position in the Russian Premier League in 2012/13, even defeating Liverpool in European competition along the way, but he subsequently slashed the club’s annual budget after apparently growing weary of his financial obligations to the team.

When the money stopped, so too did the positive results. Anzhi were relegated soon after but did manage to advance once again to the top flight before again dropping down a division in 2017/18.

During those heady, money-spinning days Anzhi attracted a host of high profile players including the aforementioned trio of Eto’o, Willian and Roberto Carlos.

Also included in Kerimov’s spending spree was the likes of Russian international Yury Zhirkov and France star Lasanna Diarra – but it seemed that the team’s inability to compete at European football’s top table soon made the endless spending harder to stomach, and they soon announced “a new long-term strategy for the club”.

Now, though, it all seems little more than a cautionary tale warning against reckless spending.

Meanwhile, Dagestan’s football hopes are now pinned on Dinamo Makhachkala who recently qualified for the second tier of Russian football for the first time in their history.