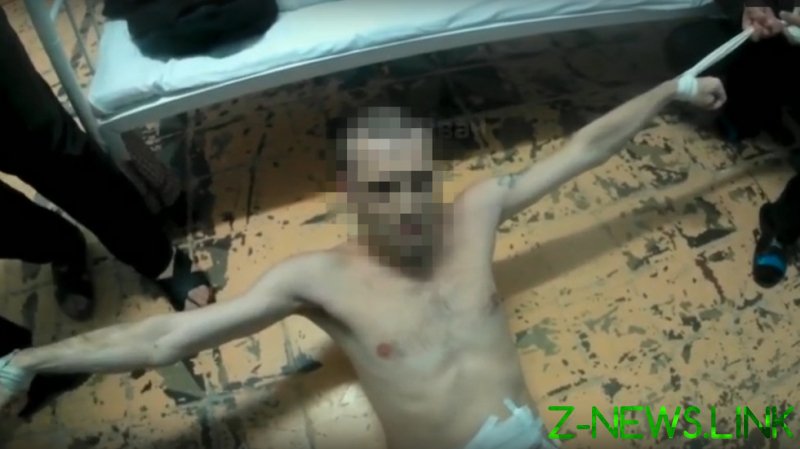 In an interview broadcast on Thursday on this network’s Russian service, Vladimir Boldyrev explained how the facility – Saratov Prison Service’s Regional Tuberculosis Hospital No. 1 – was allegedly a hub of violence and extortion. The former inmate spent three months in the jail’s medical center last year. It was his third stint behind bars.

According to Boldyrev, shortly after he and his property were searched upon arrival, he was taken to the facility’s bathhouse and forced to sign a document stating that he had no claims against the prison and its workers. Because of his initial reluctance, he was intimidated into putting pen to paper, he said.

“After reading these documents, I refused to sign them,” Boldyrev explained. “They took me to a room where there was another prisoner who had arrived with me. In front of him there was an ‘activist’ who was waving his genitals in the man’s face.”

“I knew they were threatening me too. So, I signed the documents. What else could I do?”

The so-called ‘activists’ are actually fellow prisoners who work as assistants to the prison officials, he explained. They have jobs like caretakers and orderlies but collaborate with the administration to do their bidding, including assaulting and extorting their fellow inmates. The head of them, a man named Radik Gemadeev, acted with freedom throughout the prison, as if he were an employee of the administration, Boldyrev said.

After being intimidated into signing papers, the ‘activists’ were not finished with Boldyrev, and later attempted to get money out of him, he said. According to his story, the former prisoner was transferred to a tuberculosis pulmonary department, where he was taken to “cell number 5.” This particular cell, unlike others, has no video camera and functions as a “torture chamber.”

“They took me in, a bunch of them, beat me up, tied me to the bed,” he explained.

“There is music playing in this cell. Music is playing at full volume in the corridor. Nobody can hear what is going on. Nobody can hear you shouting or calling for help. Not even the person in the cell next door.”

According to Boldyrev, he was beaten and tied up for two days before the ‘activists’ told him that he had to agree to pay money or a fellow prisoner would sexually assault him.

After the threat of rape, Boldyrev agreed to pay up. He was taken to a shower, given a phone, and told his spouse to send money to a card number provided by the prison. His wife, Margarita, immediately understood he was being extorted. She sent the transfer but contacted human rights activist Vladimir Osechkin.

“To put it bluntly, the two of them, my spouse and Vladimir Osechkin, saved my life,” he told RT.

An investigator was sent to the prison to look into his wife’s complaint. The prison officials wrote a story for Boldyrev to tell the visiting official, with the explanation that he had lost the money playing cards in the pre-trial detention center. The investigator believed him, and the prison guards left him alone after that.

“My spouse, after she sent me this money, insured my life,” Boldyrev explained, noting that Margarita’s decision to contact Osechkin and a lawyer had scared the prison guards. “That plays a very big role, as it turns out, I found out later.”

Prison officials later got him to call his wife to convince them to withdraw the complaint, but she quickly understood he was under duress.

Three months later, in October last year, Boldyrev was released. On his final day, Gemadeev – the head of the ‘activists’ – told him that he should keep his mouth shut about what happens inside the prison. In return, he’d receive the money his spouse sent during the extortion. The money came back as soon as he left the facility, he said.