Some time ago in the edition Physics Communications released scientific article “Harnessing domains for ferroelectric negative capacitance”, sponsored by Russian physicists of the southern Federal University (Rostov-on-don) Yuri Tikhonov and Anna Reasonable physics from the French University of Picardy the name of Jules Verne, Igor Lukyanchuk and anais sen and also the materials of Argonne national laboratory Valery Vinokur. In article it is told about creation “the impossible” of the capacitor with the negative charge that was predicted decades ago, but received a practical embodiment. 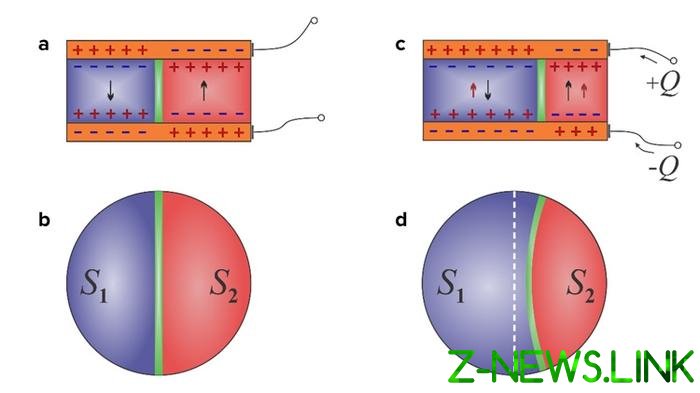 The displacement of the domain walls of the separation zone, polarity under the influence of external control voltage (Argonne National Laboratory)

The development promises a revolution in electronic circuits semiconductor devices. A couple of “negative” and conventional capacitor with a positive charge, connected in series, increases the level of the input voltage at a given point above the nominal value to the required work site-specific electronic circuits. In other words, the processor can be powered by relatively low voltage, but those parts of the circuits (blocks), which requires an increased voltage, by means of pairs of “negative” and the usual capacitors will receive a controlled diet with increased voltage. It promises to improve the energy efficiency of the computing circuits and many other things.

See also:  The ex-wife of Putin get hold of a good Villa in France

Until this implementation of a negative capacitor, a similar effect was achieved short-term and only under special conditions. Russian scientists together with colleagues from USA and France came up with a sustainable and simple structure of negative capacitors, suitable for mass production and work under normal conditions.

Physicists developed the structure of the negative capacitor consists of two separated regions each of which contains nanoparticles of ferroelectric charge with the same polarity (in the Soviet literature they are called ferroelectrics). In the normal state ferroelectric have a neutral charge, which is due to randomly oriented domains within the material. Scientists managed to separate nanoparticles with the same charge on two separate physical areas of the capacitor ― each in its own area.

The conditional border between the two bipolar regions there arose a so ― called domain wall, the field changes polarity. It turned out that the domain wall can be moved if one of the regions of the structure to let voltage. The displacement of the domain wall in one direction was equivalent to the accumulation of negative charge. Moreover, the stronger charging the capacitor, the lower the voltage on its plates. In conventional capacitors is not so. Increasing the charge increases the voltage on the plates. As negative and a common capacitor connected in series, the processes do not violate the law of conservation of energy, but lead to interesting phenomena in the form of capacity-voltage in the electronic circuit. Curious to see how these effects will be realized in electronic circuits.