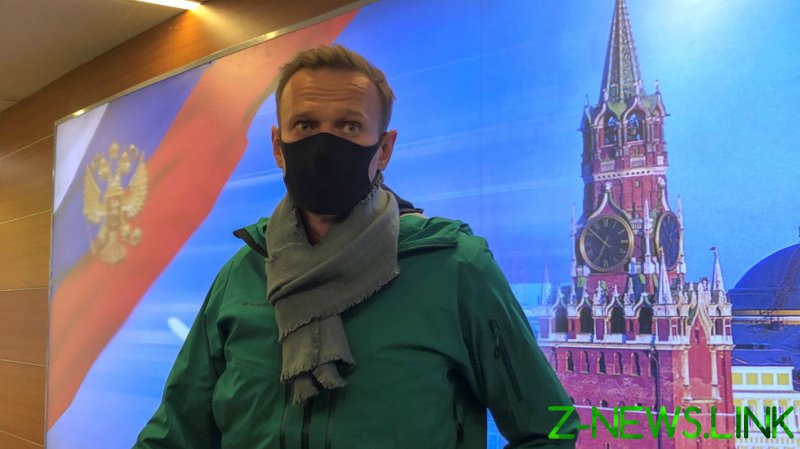 Navalny and his wife Yulia left the plane together on Sunday evening with the rest of the passengers and drove to the terminal in a bus. The activist was arrested at the immigration desk.

Russia’s prison authority has confirmed the detention. Navalny, who was wanted for breaching the terms of his probation from a previous criminal case, will remain in custody until the court rules on pre-trial restrictions against him, it said.

Navalny’s plane touched down at Moscow’s Sheremetyevo Airport, having been diverted from Vnukovo Airport where a large crowd of his supporters had gathered. There were minor scuffles with police and several arrests at the latter location. His close associates Lyubov Sobol and Ruslan Shaveddinov were among those held.

Earlier this week, it was revealed that Navalny had been placed on a wanted list in Russia shortly before the new year.

The opposition activist and anti-corruption campaigner is accused of violating the terms of his probation. In 2014, he received a three-and-a-half-year sentence, suspended for five years, for embezzling 30 million rubles ($400,000) from two firms, one of them being French cosmetics brand Yves Rocher. His sentence was later extended for a further year. It was due to expire on December 30, 2020.

On December 28, the Federal Penitentiary Service summoned Navalny to a probation office in Moscow, where he was to check in regularly due to the terms of his sentence. But he remained in Germany and didn’t attend the meeting.

The penal service insisted that the protest leader deliberately avoided their supervision, as medical papers published by the German doctors revealed that his health problems were already behind him and he was fit to travel to Russia.

The agency believes that this no-show and five other missed appointments should be grounds for Navalny’s suspended sentence to be replaced with an actual term behind bars.

On Wednesday, when Navalny was announcing his return from Berlin, he said that it wasn’t his decision to leave Russia and that he was eager to come home, despite what he called “new cases being fabricated against him.”

Navalny has been in Germany since late August 2020. He was delivered to Berlin in a coma after falling ill on a domestic flight in Russia a few days before.

Medics at the Charite clinic in the German capital claimed that their tests showed the activist was poisoned with the nerve agent Novichok, a claim disputed by doctors who treated Navalny in Siberia. Russian authorities have pointed out that all requests for the activist’s medical data have been left unanswered by Berlin, along with offers to investigate the incident together.

The opposition figure has blamed President Vladimir Putin for his alleged poisoning. The Kremlin has denied this assertion, with spokesman Dmitry Peskov accusing Navalny of having a ‘Messiah’ complex. Both Peskov and Putin have pointed the finger at the Moscow protest leader, saying he has been cooperating with American intelligence services. Navalny has threatened to sue Peskov in response.

Navalny was discharged from Charite a month after his admittance, but he opted to remain in Germany to continue his rehabilitation.