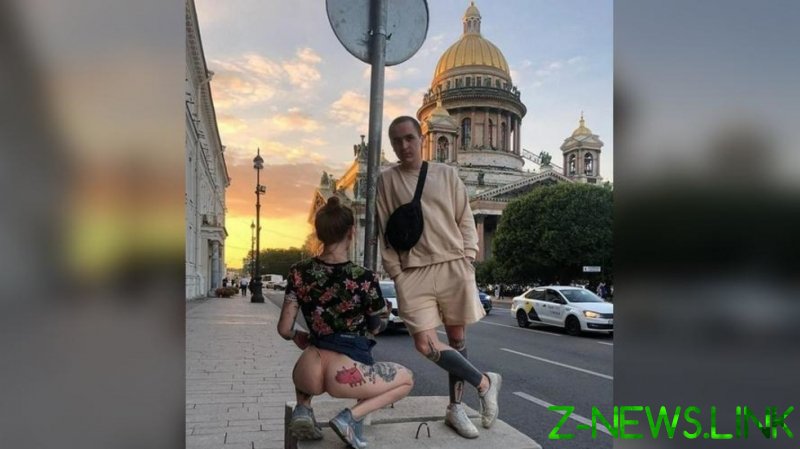 36-year-old Irina Volkova was released by the court without any conditions on Sunday, after spending about a day in detention. The prosecution had been demanding restrictions be imposed while prosecutors prepare the case, but the court dismissed dismissed the arguments as “hypothetical.”

Volkova sparked outrage earlier this week after a photoshoot, shared with her 5,000 Instagram followers, went viral. The photo in question, as well as a brief video produced over a year ago, shows the woman pulling up her skirt and exposing her heavily-tattooed backside, with the landmark St. Isaac’s Cathedral in the background.

The media attention prompted a criminal probe, with Volkova accused of “insulting the feelings of religious believers.” The model’s bare buttocks allegedly insulted authorities, religion, the Orthodox Church, and society as a whole, the prosecution argued, citing witnesses.

While in court, Volkova admitted her guilt, apologizing to anyone insulted by the photo shoot. “I apologize for taking such photographs, thereby offending the feelings of believers,” she stated. “Played an Instablogger a little bit too hard… I’ve already thought that over. Everything will be deleted and this will never happen again.”

Earlier, the blogger claimed she had fallen victim to loan sharks, who targeted her over unpaid debt bringing media attention to her controversial photoshoot. Volkova allegedly owes some 19,000 rubles ($270) to a micro-loan company.

Arguably the biggest similar scandal erupted over a photoshoot by a Tajik blogger Ruslan Bobiev (whose real name is Ruslani Murojonzod) and his Russian girlfriend Asya Akimova (Anastasia Chistova) outside St. Basil’s Cathedral. The couple imitated oral sex, with Akimova wearing a police jacket. The two were initially sentenced to 10 days in jail over disobeying police, but then were charged with “insulting the feelings of believers,” receiving 10 months behind bars each. Bobiev was also ordered to be deported back to Tajikistan after serving his term.