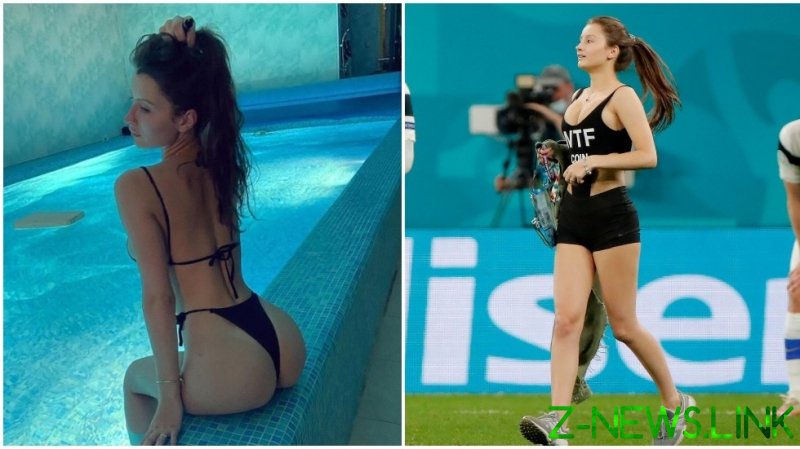 Wolanski went viral after she ran onto the field during Liverpool’s Champions League triumph against Tottenham Hotspur in 2019, launching herself into infamy as she paraded across the pitch in a skimpy one-piece swimsuit – but anything she can do, Maria Shumilina says she can do one better after she launched her own interruption during the recent Euro 2020 game between Belgium and Finland at the Krestovsky Stadium in St. Petersburg.

Swerving between players from either side, the intrepid exhibitionist was brandishing the name of a firm dealing in the rapidly growing market of digital currencies.

However, Shumilina may have landed herself in some hot water following the incident after St. Petersburg police opened an investigation, according to Telegram channel Baza.

Reports online indicate that the Russian authorities have approached drinks company Heineken to investigate suspicions that someone from the company had somehow been aware in advance of the pitch invasion – with the brewing company reportedly declining to comment to the media.

What’s more, Shumilina’s 15 minutes of fame may well have cost her an opportunity to attend further matches throughout the ongoing European Championships after it was reported that her FAN ID had been canceled, meaning that she is in effect barred from the remainder of the tournament.

Shumilina, though, doesn’t appear overly-distraught at the added attention she has received since the June 21 pitch invasion.

“Ooops SORRY,” she wrote on Instagram to accompany a selection of images of her being manhandled by security after making her way on to the pitch.

The 20-year-old stunner also attempted to capitalize on her infamy by requesting that fans tag her with the term “Girl with Euro” in their Instagram Stories, and says that she will respond to every fan who does so.

“Share this photo in your story with the caption ‘girl with euro’ and I will like you,” she wrote, also adding a ‘heart’ emoji.

It will remain to be seen if St. Petersburg police pursue any significant charges against the fame-hungry model – but judging by the reaction to Kinsey Wolanski’s Champions League streak a couple of years ago which garnered her more than ONE MILLION new social media followers, it appears that Shumilina’s brazen invasion could well pay dividends too.