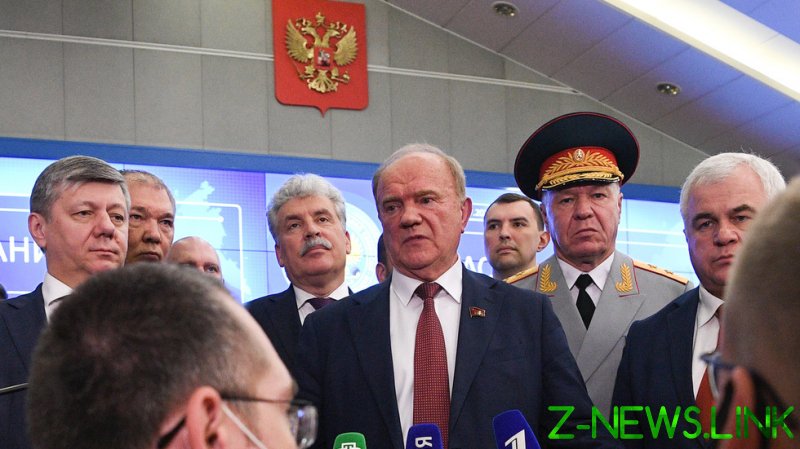 Half the seats in the State Duma are awarded by proportional representation, while the others are assigned by ‘first-past-the-post’ results in single member constituencies. United Russia, the ruling party, has officially received close to 50% of all votes cast, while sweeping the overwhelming majority of constituencies, with 99% of votes counted.

The Communist Party of the Russian Federation (KPRF), the largest opposition grouping, has come in a distant second in the local races. It did, however, significantly extend its share of the overall vote, gaining about a quarter more ballots than it did in the 2016 elections and taking its support to around 19%.

The right-wing LDPR and the center-left Fair Russia – For Truth party came in third and fourth place respectively with around 7.5% each, while youth party New People, dismissed by many liberals as a Kremlin project, crossed the 5% threshold for proportional representation in the Duma. The remainder of ballots cast are, in effect, wasted votes, as the parties that received them failed to pass that hurdle.

Meanwhile, with almost all results in, United Russia was leading in 197 of the 225 single member constituencies. The KPRF was ahead in 12, Fair Russia in seven, Independents in four, and the LDPR, Yabloko, Civic Platform, the Party of Growth, and Rodina all winning in one each. Add these to the seats assigned via party list, and the party in power is on target to get around 320 places in the Duma; the KPRF 60-65; the LDPR about 20; Fair Russia 20-25; New People maybe 12-13; and independents and minor parties 5-10.

While enough to guarantee the ruling party a constitutional majority, the result amounts to a loss of about 20 seats for them compared to the last election and a corresponding increase of 20 or so for the Communists. Fair Russia – For Truth will remain roughly where it was before, while the LDPR stands to lose 15 or so Duma members. New People has not previously been in parliament and so any seats it gets are gains.

Despite seeing its share of the vote fall since 2016, when the party polled at 55%, United Russia emerges as the big winner, and will maintain its ability to pass constitutional reforms without depending on other parties. Even the Communists’ advances should not cause it serious concern as part of United Russia’s appeal has always been that it is the only party capable of defeating the KPRF. The stronger the KPRF, the more reason there is for middle-of-the road undecideds to turn to the party that promises to prevent a turn back to the days of the Soviet Union.

Inevitably, though, United Russia’s success will raise suspicions of electoral fraud. Prior to the election, the party was polling at only 35% of decided, definite voters. In the past, undecided voters have tended to swing in their favor, or just stayed home, so it’s not altogether surprising that the party’s final result was higher. That said, 50% may well be stretching the limit of what is plausible given the pre-election polls, which put it at closer to 45% when the ‘don’t knows’ and those who don’t intend to vote were excluded.

Many observers will no doubt conclude that the extra percentage points were gained in a dishonest fashion. Indeed, the Central Electoral Commission rejected votes from several polling stations after videos emerged of ballot stuffing. It’s quite plausible that there were plenty of other cases that were not discovered.

If there was major fraud, the main party to suffer would have been the Communists, even though this year’s election promises to be the best for the KPRF since 1999. This is quite remarkable. Since the mid-1990s, the KPRF’s poll ratings have been in steady decline. Now, however, the group has got a new lease of life and its position as the Russian Federation’s primary opposition force can no longer be in doubt.

However, the party has said it will call for an investigation into election results in Moscow, with a focus on electronic voting, which leader Gennady Zyuganov said amounted to “a hack.” According to him, the digital returns were far less favorable than those made in person. “This can’t be allowed to stand, especially in our nation’s capital,” he said.

In contrast to the Communists’ success, Russia’s liberals have been pretty much annihilated. Three long-standing liberal parties stood for election this week – Yabloko, Civic Platform, and the Party of Growth. It looks as if they might each win one single member constituency. But their overall share of the vote was dismal – around 1% for Yabloko; 0.3% for the Party of Growth; and 0.1% for Civic Platform.

Likewise, the efforts of the so-called ‘non-systemic’ liberals amounted to nothing, particularly the ‘Smart Voting’ system invented by jailed oppositionist Alexey Navalny. This aimed to persuade electors to cast their vote for whatever candidate was most likely to beat that of United Russia. Unfortunately for Navalny, with the party of government looking likely to win the vast majority of single member constituencies, it’s obvious that the effort to defeat it through tactical voting has failed dismally.

With its forces in disarray, perhaps the only ray of hope for Russian liberalism this week is the good performance of the New People party.

Founded last year by businessman Alexey Nechaev, New People’s rise has been rapid. The party aims to attract liberal-minded urban professionals with a moderately right-of-center, free market approach that stresses elevating fresh faces and getting stuff done at a regional level rather than fighting the authorities in Moscow.

This approach has led many to denounce New People as pro-Kremlin spoilers, and the party has shrugged off allegations that its activists have also campaigned for United Russia. But if it does make it into the Duma, the party will be able to make a good case that its ideas have much greater appeal than those of people like Navalny. After years of street demonstrations have driven Russian liberalism into the abyss, New People’s non-confrontational approach may be what is needed to spark a liberal revival.

For now, though, power remains in the hands of United Russia. This does not mean that Russians are content with its government – after all the party only won about half of all votes, on a very low turnout of only 51% of all eligible voters. Nevertheless, despite its losses, the elections have basically confirmed the existing balance of power. By hook or by crook, the Russian authorities have got the result they want.