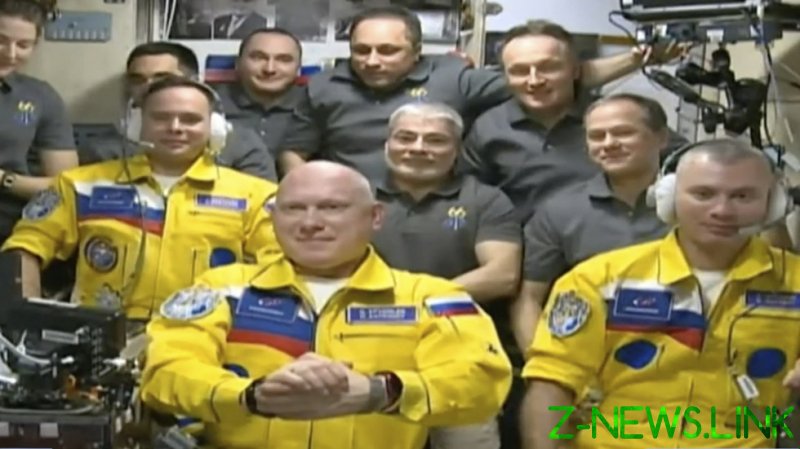 Multiple Western media outlets, including The Independent, The Guardian and others, rolled out articles about the cosmonauts’ suits, suggesting the fresh team were “wearing colors of Ukraine flag.”

“It was unclear what, if any, message the yellow uniforms they changed into were intended to send,” the article in The Guardian reads.

The bizarre attention the media has directed towards the outfits worn by the new cosmonaut team has been ridiculed by Russian space boss Dmitry Rogozin, who blasted speculation about the colors as just part of the “information war” against Russia.

“Some Bandera rejects and their Anglo-Saxon sponsors no longer know what to come up with in their information war against Russia,” Rogozin said in a Telegram post. “I want to disappoint you. Our cosmonauts would rather see the Ukrainian Nazis in their coffins.”

The flight suits’ colors were a nod to the Bauman Moscow State Technical University, from which all the cosmonauts of the new team had graduated, Rogozin explained. The university’s emblem has dominant yellow and blue colors, while the Soyuz-2 launch complex itself has a similar color palette, he went on, sharing the emblem of the university to reinforce his point.

One of the cosmonauts, Oleg Artemyev, elaborated further on the suits affair, confirming that the colors opted-for had nothing to do with the Ukrainian crisis. The suits are made specifically for each crewmember some six months before the launch, he said, so it simply could not be linked to the Russian offensive launched late in February.

“In past flights, I had flight suits in yellow, white, and blue. There is no need to look for secret signs and symbols in our uniforms. Color is just color. It has nothing to do with Ukraine,” Artemyev stated. “These days, despite the fact that we are in space, we stand together with our president and our people!”