The destruction of targets at a distance of several hundred kilometers, pinpoint accuracy bombing and the protected equipment, together with the latest bombs and missiles aviation complex of the fifth generation su-57 will receive advanced electronics for their guidance. The plane will be able to avoid enemy traps and to break through the wall radar interference. 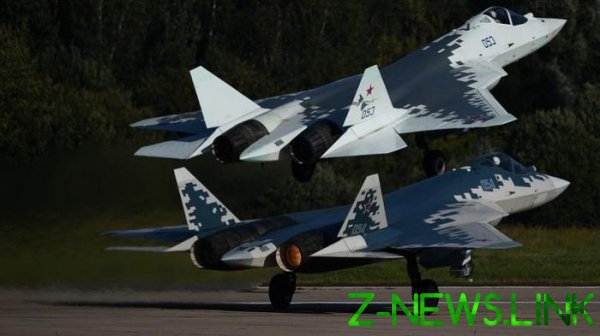 The fifth generation fighter, the su-57 is not just the aircraft, but a combat system that includes the latest air attack. The list of weapons is classified, however, it is known that the enterprises of the military-industrial complex to develop about fifteen samples.

According to experts, the main Arsenal of the su-57 would serve existing videoconferencing Russia percussive tools, but completely redesigned and digitalized. For example, a new anti-ship missiles with doubled range to 250 kilometers. It is noteworthy that apparently the ammo look the same as predecessors.

Changes mainly dealt with the internal stuffing — the rocket is now more powerful and compact “brains”, control system and the engine provides a complex trajectory. Hidden in the housing of the electronic equipment is resistant to external electronic interference, various traps and does not respond to decoys.

“Before targeting missiles “air — air” or “air to ground” is transmitted through the analog converters that has taken some time, — says military expert Alexei Leonov. — At that time it met the requirements of combined arms and air combat. Now the situation is different. In the area of modern air combat has many electronic warfare systems: both ground and air. In such circumstances, the weapons should be very reliable. Su-57 was created taking into account these factors, its systems fully digital transfer of the flight task, targeting, redistribution purposes is a matter of seconds”.

So, for promising “drying” developed “smart” bombs KAB-250. After a reset, the media trajectory of its flight is corrected by signals of satellite system GLONASS. Now the ammunition is tested on landfills and even managed to test in combat — bombers With 34 dropped KAB-250 the objects of militants in Syria.

The bomb showed high efficiency and, most importantly, accuracy: deviation from the goal of only plus or minus two meters regardless of weather conditions and time of day. The power of the warhead allows the pilot to hit not only the technology and the accumulation of manpower in the open, but well-fortified enemy targets.

In addition, as previously reported in the defense Ministry, the su-57 will take on Board and hypersonic weapons. It is expected that the new aviation complex “Dagger”, “fifty seventh” will receive after 2030.

Honored military pilot of Russia Vladimir Popov is sure that the range of weapons for the su-57 in General remain traditional for aircraft of this class, but thanks to advanced sighting systems, the accuracy will increase significantly.

So, missiles for combat at close and medium range it will automatically track targets by heat and magnetic track and focused with the opto-electronic head.

“Accuracy characteristics will increase by 30-40 percent — said Popov. This is a very good indicators of the combat capabilities for detection and homing. Modern missiles strikes with pinpoint accuracy. The same applies to ammunition and long-range. However, play an important role in radar and thermal component”.

Miniaturization of electronic equipment of modern rockets allows for enhanced warhead ammunition due to the increase in charge. The probability of hitting the target and, as a consequence, the overall effectiveness of weapons grow significantly. Su-57 would be able to fight with any objects in the air and on the ground — dynamic and ballistic targets, as well as smaller sized, such as drones.

Controls in battle all the systems of advanced aircraft, use of weapons, defense organization and multi-mode smart support of the pilot tied to a powerful computer system. The computer automatically recognizes and identifies the most dangerous and priority targets, building the optimal route of flight, tells the pilot when and what weapons you should use.

To search for and detect targets in the su-57 there are several radar stations of new generation. In addition to the radar with active phased antenna array in the front of the plane, there is a station, side view, working in different bands. Su-57 can easily find in the sky hundreds of miles away any aircraft, including built on technology “stealth”.

The feature of the fifth generation fighter — vnutrifyuzelyazhnyh the placement of weapons. Due to the fact that there are bombs and missiles on external hardpoints, reduced effective dissipation surface and accordingly, visibility of the aircraft. Two roomy compartments su-57 will fit several dozen different ammo.

Previously, it was only on a massive strategic bombers, so the weapons developers had to solve a difficult task: to design a rocket with smaller dimensions, to equip them with folding wings and rudders that are revealed only after a reset of the munition. Difficulties have arisen because of the additional loads on the aircraft when the missile from confined space.

The attitude of the payload, which can take the su-57, its weight is significantly higher than the fighters of past generations. This is achieved through composite materials.

“The su-30SM and su-35, for example, up to 25 percent of the material — metals, — said Popov. — Composites, fiberglass, Kevlar fabrics, various resins. Thus the strength characteristics of the structure saved. The su-57 of about 35 percent. It is very much so the fighter turned much easier with similar dimensions. Besides the new engine will increase thrust / weight ratio by 15 percent.”

A proprietary “chip” of the new aircraft — ability to work in a pair with an unmanned system With a 70 “Hunter”. Heavy drone fighter and learned to fly in tandem — last year the defense Ministry has published a video in which they maneuver in the air at a minimum distance from each other.

According to experts, in the future it will be possible to create an entire flock of “Hunters” operating in Autonomous mode or under the direction and control of one pilot of the su-57. The impact potential of these battle groups will increase significantly.