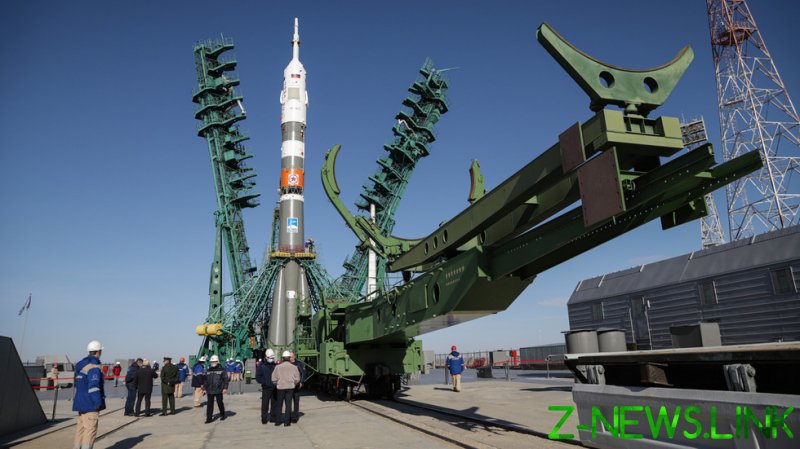 That means the trip is shorter than a standard Moscow to London flight. The three travelers took off from a launch site in Kazakhstan just before noon local time on Wednesday, riding aboard a Soyuz spacecraft. They are expected to dock at the ISS in record time under the new flight plan.

Later in the day, the Soyuz capsule carrying the space trio safely docked at the ISS. Russia’s Roscosmos agency celebrated the expedited mission’s success, uploading images that showed the spacecraft approaching the station’s port at minimal speed. “Contact and capture!” it wrote on Twitter.

The MS-17 mission made it to the ISS in record-breaking time, Roscosmos said.

Meanwhile, Russian cosmonaut Ivan Vagner captured the MS-17 launch from aboard the ISS. The lift-off was perfectly visible from above, with the rocket leaving a trail of white smoke on its way to space.

The “ultrafast” rendezvous scheme requires only two orbits around Earth before the craft catches up with the station, cutting travel time in half compared to the previous method, which itself improved on an even older model that took over two days. Though the new flight path debuts on this mission, it has been vetted in unmanned tests with a resupply craft.

The trip is led by Russian commander Sergey Ryzhikov, joined by flight engineers Sergey Kud-Sverchkov – also a Russian – and Kathleen Rubins of America’s space agency NASA. Rubins is traveling to the ISS on the last Soyuz seat currently contracted by the US, potentially becoming the final American to hitch a ride on a Russian rocket as the US works to regain its own manned launch capability.