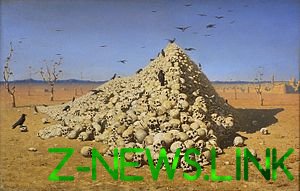 The Russian Ambassador in Turkey Alexey erkhov stated that he continues to receive numerous threats.

– Things like “We will construct skyscrapers from the skulls of your soldiers” and “Pay the price for every drop of blood you shed” and so on”, – said the Ambassador in an interview with “Star”.

The Ambassador also emphasize that such threats cannot be ignored. According to Erchova, they affect not only him, but also all other Russian diplomats, as well as the country as a whole.

Recently in the Kremlin, stressed that Turkey will take all measures for the safety of the Embassy staff, and every one of the Russians.

Earlier, the Turkish leader Recep Tayyip Erdogan has accused Russia and Syria to the shelling of civilians in Idlib. The Russian side rejected the accusations. In Moscow said that the cause of the escalation in the Syrian province was the failure of Ankara’s obligations.

Previously the website kp.ru wrote about the fact that the Kremlin has responded to the threat to the Russian Ambassador. Diplomat Alexei erchov began to receive scattered reports after the aggravation of the situation in Syria.