Russian activists predicted the imminent collapse of the bridge Kerch 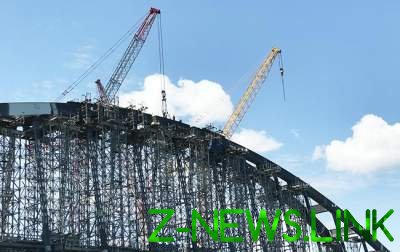 According to public opinion, there are several reasons due to which the Kerch bridge will inevitably collapse.

The construction of the Kerch bridge Russia annexed the Crimea could collapse this winter. This statement was made by Russian human rights activist and founder of group “Freight-200 from Ukraine to Russia” Elena Vasilyeva in Facebook.

“Kerch bridge will collapse, most likely this winter. Already two platforms have failed. They are trying to recover, but the Russian people do not understand that there is a fracture in the earth’s crust, the bottom itself is not Il. As these platforms there is fixed – it is not clear even to geologists investigating the Earth’s crust in this place. It is known that the amplitude of oscillation up to 20 cm per year, i.e., motion of the crust in this place, and therefore did not build the bridge,” she writes.

According to Vasilyeva, in addition to the geological reasons for the destruction of the bridge there are grounds for violations of international norms.

“Bridge construction is not consistent with Ukraine – a violation of international norms. I know that when the bridge was built, Ukraine will take a lawsuit to the Hague, as was the case with “Greenpeace” in the court of the law of the sea. The bridge will have to be dismantled,” – said the activist.

In addition, she drew attention to the problem of clogging of earth and deficiency of power on the Peninsula after the Russian occupation.

“There now, because of the overlap of the water channels began brining the cultivated areas, and will take at least 20 years of irrigation to once again the soil was suitable for agricultural works. Vineyards were cut down almost everywhere, this year with a minimal crop. The lack of fresh water in the soil continues destructive action everywhere. I saw with my own eyes these channels in Ukraine, passed by me. Almost everything closed, minimum water, to the Crimea it is entirely lacking. Zaporizhzhya NPP has almost stopped the flow of email. energy. Served on schedule. Night cities and towns without light, on personal diesel generators”, – said Vasilyev.