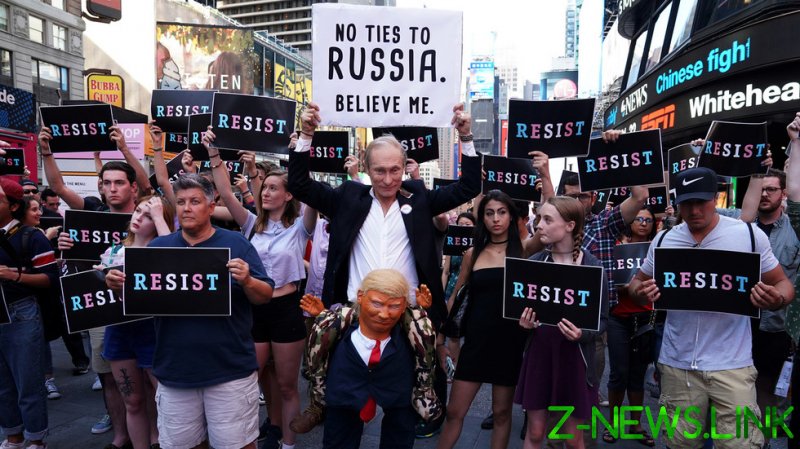 The indictment of Igor Danchenko on Thursday is the latest development in the painfully slow unravelling of the conspiracy behind the Russiagate hoax. At the same time, however, it is also a new window into the workings of the so-called ‘deep state’ forces that bought into the lies and wielded them like weapons against Trump’s presidency.

They didn’t get value for money, it seems. The subsequent Steele Dossier has since been exposed as a complete fraud – and one that wasn’t even well put together. Its damning ‘evidence’ referred to payments from the Russian consulate in Miami, despite there being no Russian consulate in Miami. Stories of secret servers, Trump staffers meeting with Moscow’s agents in Prague, and with Julian Assange in the Ecuadorian Embassy, secret pee-pee tapes: the list was never-ending. All have been proven false.

What’s almost worse is that US intelligence knew it all boiled down to gossip and fraud, with then-CIA Director John Brennan warning President Obama in July 2016 that the Clinton campaign was effectively fabricating a Russia-Trump conspiracy theory.

The Russiagate accusations and investigations didn’t lead anywhere in terms of proving a conspiracy between Trump and the Kremlin. But the smears were successful in terms of delegitimising Trump, casting him as a Russian agent throughout his presidency and preventing any rapprochement between Washington and Moscow. Russiagate undermined key American institutions and intensified confrontation between the world’s two largest nuclear powers.

The tables appear to be turning against the Russiagate hoaxers and their media enablers as new investigations explore how the greatest scandal in US history – a foreign agent in the White House – turned out to be one big deception.

FBI Director James Comey gave Congressional testimony in December 2018, explaining how he came to give credibility to the obviously fraudulent Steele Dossier. Comey managed to say he “can’t remember,” “can’t recall,” and “doesn’t know” no fewer than 245 times. It has also been revealed that the DNC never gave the FBI access to its servers, allegedly hacked by Russians, and instead outsourced the investigation to the private corporation CrowdStrike.

The first indictment went out against cybersecurity lawyer Michael Sussmann in September 2021. Sussmann reported to the FBI that be had uncovered a secret server linking the Trump organisation to Russia’s Alfa-Bank, which was treated by the media as a smoking gun. Sussmann was indicted for lying to the FBI because he presented himself as an independent cyber expert when he peddled the false server story, when in reality he was hired by the Clinton campaign.

Special Council John Durham has now arrested and indicted Igor Danchenko, an analyst at the Brookings Institution. Danchenko was the primary source behind the infamous Steele Dossier ordered by Hillary Clinton. He has been indicted for lying to the FBI, as he claimed the information later featured in the dodgy dossier came from a phone call and meeting in New York with the Russian-American Chamber of Commerce’s president at the time, Sergey Millian.

Millian insists that no such conversation ever took place, either by phone or in person. The FBI investigation concluded that the phone call was made up, and Danchenko had repeatedly emailed Millian but never received a response. Danchenko’s trip to New York did not involve a meeting with Millian, and Danchenko was actually with his family at Bronx Zoo when the meeting was supposed to have taken place.

Danchenko worked for several years for Fiona Hill, who is a senior fellow at the Brookings Institution, an anti-Russian hawk, and perhaps the most devastating witness against Trump in the impeachment hearings of 2019. Hill assisted in advancing Danchenko’s career and introduced him to Christopher Steele and Democratic Party operative Chuck Dolan. The latter contact is important, as Danchenko is also indicted for lying to the FBI about speaking to him.

The Brookings Institution is one of the oldest and influential think tanks in Washington, of the kind initially envisioned as an intermediary to connect politicians with academics so the decision-maker could make informed decisions. However, this world of influence has since become a billion-dollar industry due to the development of a business model in which policy gets put up for sale. The Brookings Institution is now seemingly involved in the largest political fraud in US history.

The deep state on trial?

The term ‘deep state’ can easily be dismissed as a conspiracy theory of a hidden government, although in reality it merely denotes a bureaucracy that can act autonomously and pursue independent policies. Officials often, out of choice or necessity, operate to some extent independently from the elected officials they are supposed to serve.

For example, NATO’s 30 member states keep co-operating irrespective of the constant cycles of elections that rotate new defence ministers around the table. Some things happen regardless of who is in charge.

The bureaucracy can lean on everything from think tanks, intelligence agencies, and a myriad of institutions who inform the politicians and implement their decision-makers. The undemocratic bureaucracy acting under the democratic institutions can be considered a deep state – a government within a government that ensures continuity of the status quo.

When the status quo is disrupted, the deep state may act independently against the policies of the democratic institutions. Russiagate revealed that the election of Trump, with the stated intention of “getting along with Russia,” triggered the bureaucracy to act independently of democratic institutions. Intelligence agencies laundered gossip and smears by presenting them as credible; investigations were initiated on deeply flawed evidence to undermine the legitimacy of an elected representative; military leaders bragged about withholding information from the president; the media acted as soldiers in an information war by uncritically pushing bizarre narratives; and one of Washington’s major think tanks is now involved in the fabrication of the entire Russiagate scandal.

The status quo of anti-Russian policies and narratives usually enjoys bipartisan consensus and therefore goes on without criticism or fanfare. However, the mistake made by Russiagaters was to turn hysteria over Moscow into a political weapon, which one side had to defend against. Now it is coming undone; the recriminations are likely to go beyond the journalists, politicians, and imaginative analysts who backed it, and shine a light on the darkest recesses of the American state.