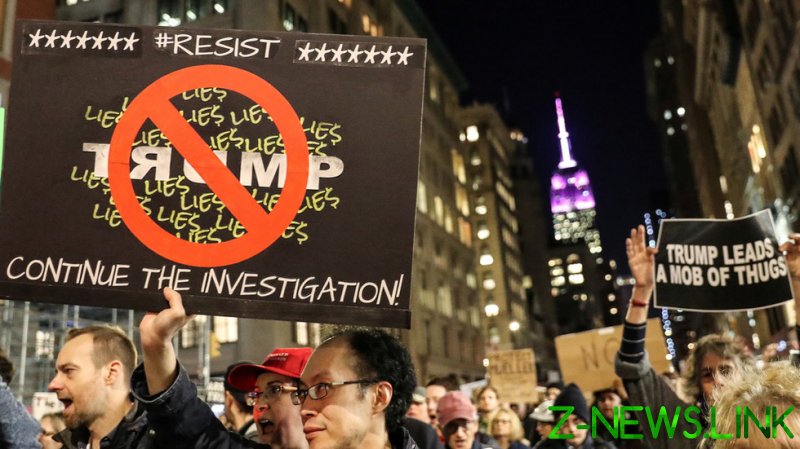 Michael Sussmann was charged with making a false statement to the FBI, falsely telling counsel James A. Baker that he was not acting on behalf of a client, even though he represented an unnamed tech executive, an internet company, and Hillary Clinton’s presidential campaign.

In the September 19, 2016 meeting, Sussmann presented Baker with claims that the Trump Organization had been using a server of the Russian Alfa Bank as a secret communication channel. According to the indictment, the executive was conducting “opposition research” on Trump, while Sussmann was “coordinating” with the Clinton campaign in presenting that information to the FBI and the media.

While many US media outlets pointed to the Alfa Bank claims as proof of Trump’s “collusion” with the Kremlin, the FBI found that the email server in question was run by an advertising agency that sent out promotional emails for Trump’s hotels, among other things. Special counsel Robert Mueller ignored it in his sweeping probe entirely.

Sussmann represented the Democratic National Committee in matters related to the alleged 2016 hack of its computers and documents, which Clinton and the DNC have blamed on Russia, but could never prove.

The indictment was rumored back in August in the Wall Street Journal, while the New York Times cited “people familiar with the matter” to preemptively frame it on Thursday, using quotes from Sussmann’s attorneys and the lawyer for the unnamed tech executive.

Sussmann “committed no crime,” his attorneys Sean Berkowitz and Michael Bosworth told the paper, adding that any prosecution would be “baseless, unprecedented and an unwarranted deviation from the apolitical and principled way in which the Department of Justice is supposed to do its work.”

Steven Tyrell, lawyer for the person who fed Sussmann the claims about Alfa Bank, said that his client sought legal advice from Sussmann who had “advised him on unrelated matters in the past,” but did not know his law firm had a relationship with the Clinton campaign “and was simply doing the right thing.”

Perkins Coie is not named in the indictment, and is referred to only as “Law Firm-1.” Another partner at the Washington, DC firm, Marc Elias, was general counsel to Clinton’s 2016 campaign. He also reportedly served as the conduit to funnel DNC funds to former British spy Christopher Steele, author of the infamous “dossier” alleging Trump’s ties to Russia and bawdy behavior in Moscow.

The FBI also paid Steele, and used the dossier as pretext to obtain warrants to spy on Trump – first as candidate, then as president – via his aide Carter Page.

The dossier’s claims were never substantiated, and it later emerged that Steele’s sources basically fabricated the whole thing in exchange for cash.

Durham was assigned in May 2019, by then-Attorney General William Barr, to investigate ‘Crossfire Hurricane,’ the FBI’s 2016 probe of Trump. He was made special counsel in December 2020, to ensure his probe would continue after Democrats took over the White House.

While the FBI’s original probe and a subsequent special counsel investigation headed by Robert Mueller delivered nothing on Trump, they saw a number of his campaign aides and associates jailed or ruined by legal fees, such as national security adviser Michael Flynn, political operative Roger Stone, and junior aide George Papadopoulos. Former campaign manager Paul Manafort was imprisoned for tax fraud on his lobbying in Ukraine.

Meanwhile, the only other indictment that came out of Durham’s probe was against a low-level FBI lawyer Kevin Clinesmith, who altered evidence in order to secure a FISA warrant for spying on Page. He pleaded guilty to a lesser charge of making a false statement, and was sentenced in January to a year of probation and 400 hours of community service. His license to practice law in Washington, DC was quietly reinstated earlier this month.