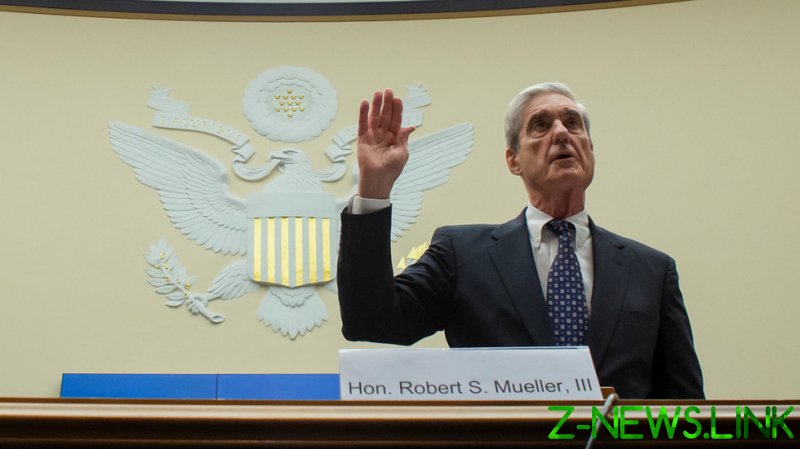 The short course, titled ‘The Mueller Report and the Role of the Special Counsel’ was announced on Wednesday. It is sponsored by the Karsh Center for Law and Democracy, a nonprofit based at the law school whose mission is to “promote understanding and appreciation of the principles and practices necessary for a well-functioning, pluralistic democracy.”

“I was fortunate to attend UVA Law School after the Marine Corps, and I’m fortunate to be returning there now,” Mueller was quoted by the school as saying. “I look forward to engaging with the students this fall.”

The 76-year-old will lead “at least one” class, the university said, but the bulk of the work will be done by Aaron Zebley, himself a UVA alum. Zebley will be assisted by Jim Quarles and Andrew Goldstein, who also served on Mueller’s special counsel team.

According to the school, the course will cover the investigation chronologically, starting from Mueller’s appointment as special counsel in May 2017. Other sessions will focus on relations with Congress and the Justice Department, investigating the White House, and even the prosecution of Roger Stone, a former Trump aide convicted of lying to Congress about his ties to WikiLeaks. Stone himself categorically denied that he had colluded with the site prior to the release of the Clinton campaign emails.

The announcement raised some eyebrows on the political right, which saw it as yet another reward to the FBI, DOJ and intelligence officials who conjured Russiagate from thin air and spent years using it to undermine Trump’s presidency. Democrats had built up Mueller’s investigation as the silver bullet that would depose Trump and prove “Russian meddling” in the 2016 election, but were ultimately disappointed by his final report, which found no collusion and declined to charge the president with obstruction of justice.

Mueller himself provided the lowest point of the investigation with his mumbling and disjointed testimony before the House in July 2019. Within a few weeks, the ‘Russiagate’ narrative was gone and forgotten, as the Democrats sought to impeach Trump over aid to Ukraine instead.

Prior to becoming a special counsel with cult-like status among the Democrats, Mueller ran the FBI from 2001 to 2013, the longest tenure at the post since J. Edgar Hoover. He was replaced by James Comey, whose firing by Trump in May 2017 precipitated the probe.

Comey actually told Congress in 2017 he had leaked his supposedly private memos of conversations with Trump to the press after getting fired, in order to force the appointment of a special counsel. Mueller was appointed by Deputy Attorney General Rod Rosenstein – who had recommended Comey’s removal himself – put in charge of all investigations into the Trump campaign by the recusal of AG Jeff Sessions.

The University of Virginia in Charlottesville was founded in 1819 by former US President Thomas Jefferson. Its law school is the second-oldest continuously operating in the US. The Karsh center was set up in 2018, through a $50 million grant from alumni Bruce and Martha Karsh, who donated lavishly to Hillary Clinton’s campaign two years prior.