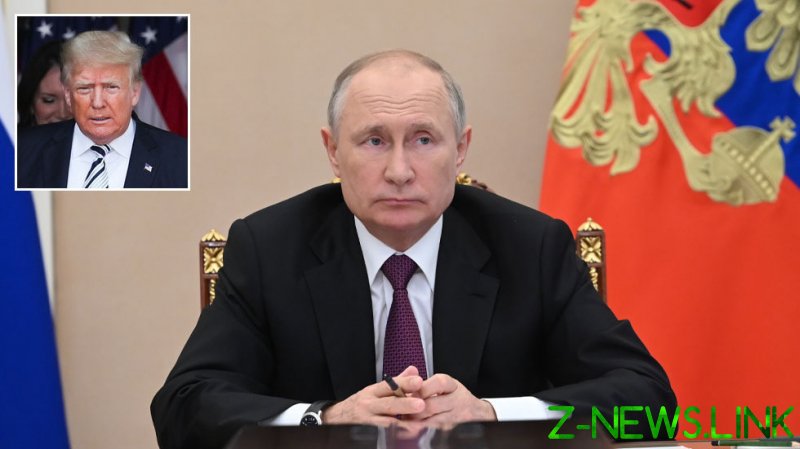 On Thursday, London’s Guardian newspaper delivered the latest installment in this long-standing ‘Russiagate’ tradition. Rolling out a series of supposed revelations, intended to shock readers with the scale of the alleged deception behind Trump’s win, journalist Luke Harding, who has previous experience in publishing fake stories on this theme, alleged that Russian President Vladimir Putin “personally authorized a secret spy agency operation to support a ‘mentally unstable’ Donald Trump in the 2016 US presidential election.”

The rationale for the move was apparently that a Trump White House would be more sympathetic to Russian interests, and would sow chaos in the country. Intelligence and security agencies were supposedly told they should use “all possible force” to put the then-Republican front-runner into office. If the plan existed, it backfired catastrophically, given that relations between Moscow and Washington deteriorated to almost unprecedented lows during the years that followed, with sanctions and political rows becoming a regular occurrence.

The bombshell expose is based entirely on “what are assessed to be leaked Kremlin documents,” of unknown origin. According to Harding and his colleagues, “The Guardian has shown the documents to independent experts who say they appear to be genuine.” Who these experts are, where their expertise lies, and why they have not been named remains unclear, despite requests by online commentators.

According to Harding, “Western intelligence agencies are understood to have been aware of the documents for some months,” giving a hint as to where his sources might lie. The article goes on to say that the papers “seem to represent a serious and highly unusual leak from within the Kremlin.” This, however, apparently did not merit a serious verification of their authenticity beyond pointing to some unknown experts, whoever they may be.

Even stranger is the manner in which the report is written up. One line on the purported Kremlin memo “says Trump is the ‘most promising candidate’ from the Kremlin’s point of view,” before going on to add that “the word in Russian is perspektivny.” Quite why, from a secret document presumably entirely written in Russian, the reader would need to know that particular translation is unclear. Maybe it is to reinforce the strange foreignness of the people said to have written it. Perhaps it is just to meet a word count. Or possibly Harding is trying to impress readers with his basic knowledge of Russian. Like those dimwits who say “Kah-Jay-Bay” when referring to the erstwhile KGB. We may never know.

Other journalists have pointed out that the piece is peppered with caveats, such as “appear to show,” “suggest” and “assessed to be.” Possibly indicating doubt in the mind of the authors, or a request from lawyers in case the papers turn out to be a fraud, it almost certainly indicates that few believe the allegations would stand up in a court. Cody Derespina, senior editor at Newsmax, said the article had “more hedges than the garden at a fancy British estate.”

Indeed, a (possibly dangerous) drinking game suggestion might be to have a shot every time you see the word “appear,” “suggest,” “apparently,” or the phrase “assessed to be,” in this desperately poor article.

In addition, questions have been raised by native Russian speakers about the language of the source material used by Harding and his colleagues. Ivan Tkachev, a writer for Moscow business daily RBK, wrote on Twitter that, although much of the supposed leak was kept secret, The Guardian “has posted small extract from the Kremlin document presumed to be authentic.”

He said “I have counted 4 linguistic errors and a couple of dubious instances of word usage,” including misplaced punctuation, unnatural word choices and lexical mistakes. “So, with a considerable degree of confidence I can assume this is either ‘Google-translated’ text from foreign language to Russian or a text composed with help from an unschooled Russian speaker, or both,” he concluded.

Even some of the fiercest opponents of the Kremlin have expressed concern over the authenticity of Harding’s sources. Natalia Antelava, a former BBC staffer, drew parallels between the report and an infamous case of disinformation and lazy analysis of Russia, published by Edward Lucas, himself no fan of the Kremlin. In the anecdote, an ambassador recalls as fact something passed down “by our security service,” which had actually been penned by the author weeks beforehand as satire and attributed to Colonel Khuiyovich – which translates to a profanity in Russian.

“This Guardian story about the alleged Kremlin Trump ‘leak’ is making big waves & raising big questions about authenticity of sources behind it,” Antelava asked. “Has Colonel Oleg Khuiyovich returned to duty once again?”

Harding himself has something of a checkered past when it comes to reporting standards. In 2007, while working in Moscow, he was accused of plagiarism by a now-defunct magazine named The Exile. His employer was forced to issue an apology as a result.

Others have pointed out that Harding was also behind a widely discredited ‘Russiagate’ story back in 2018. Citing anonymous sources once again, he alleged that Trump advisor Paul Manafort had met with wanted WikiLeaks whistleblower Julian Assange in the Ecuadorian embassy in London. Despite being widely discredited and even mocked, no apology or retraction was ever made. Time will tell whether one is needed for the latest supposed revelations.