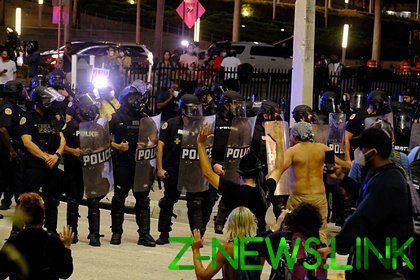 Former national security adviser in the administration of former President Barack Obama, Susan rice have suspected Russia of involvement in the riots in the United States. She stated this on CNN, reports Fox News.

The official said that did not read the information from the intelligence community on this issue, and is based only “on their own experience.”

This is not the first case when the CNN sound like statements. So, on may 30 one of the experts also saw the “Russian trace” in the riots in the United States. According to him, the protests were allegedly attended by “Russian agents” or “grouping of white supremacy”. “The Russian elections of 2016 pretended to be black activists. Maybe they involved in this?” — said the expert. After that, the President of the United States Donald trump stood up for Russia and criticized the TV channel. According to him, CNN once again produces the “fictional news”.

In dozens of U.S. cities held protests accompanied by rioting, vandalism and attacks on police. It all started after the death in Minneapolis (Minnesota) black guard George Floyd, who died after a rough arrest. Protests against police brutality held in Los Angeles, San Francisco, Denver, new York, Indianapolis, Boston, Detroit, and many other U.S. cities and even Toronto, Canada.

The US government said that any clashes with the police or threats officers of the law are regarded as acts of domestic terrorism. During these clashes, gunshot wounds were got by two police officers, one of whom died.