Russia warns US and UK about Ukraine’s ‘dirty bomb’ plans 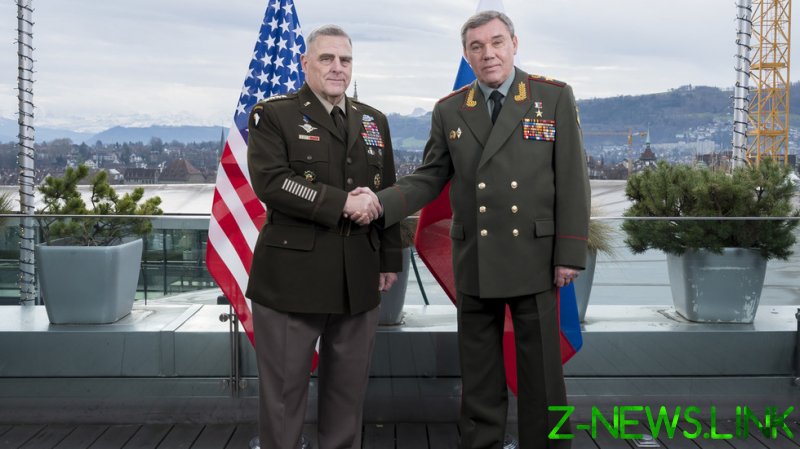 Moscow has discussed the threat of Kiev potentially using a “dirty bomb” with London and Washington at the level of the chiefs of the General Staff, the Russian Defense Ministry said on Monday. The Russian chief of defense, General Valery Gerasimov, raised his country’s concerns in a phone call with US Chairman of the Joint Chiefs of Staff, General Mark Milley, after having a similar conversation with his British counterpart, Admiral Sir Tony Radakin.

The Pentagon only mentioned that the two generals discussed “several security-related issues of concern” without providing any further details. It was the first such conversation between Gerasimov and Milley since May.

The British Defence Ministry said the phone call between Radakin and Gerasimov took place “at the request of the Russian Ministry of Defense,” adding that the UK “rejected Russia’s allegations that Ukraine is planning actions to escalate the conflict.” Radakin also “restated the UK’s enduring support for Ukraine,” the ministry’s statement added.

London also agreed it was important to keep communication channels with Moscow open to “manage the risk of miscalculation and to facilitate de-escalation.” The developments came a day after Russian Defense Minister Sergey Shoigu raised similar concerns in phone calls with the defense chiefs of the US, UK, and France.

Moscow has been warning Western nations about Kiev’s alleged plans to use a “dirty bomb” to frame Russia for quite some time. The West, however, has remained largely dismissive of such warnings.

Earlier on Monday, the Russian Defense Ministry claimed that Kiev wants to frame Moscow as a “nuclear terrorist” by accusing it of using weapons of mass destruction and thus potentially launching a “powerful anti-Russia campaign.” Kremlin spokesman Dmitry Peskov also stated that the West’s disbelief in this scenario does not make the threat any less pressing.

Kiev has denied Moscow’s allegations. Ukrainian President Vladimir Zelensky also said that the only side capable of launching an attack using nukes is Russia itself.

Meanwhile, the UN called on all sides of the conflict to show restraint. Stephane Dujarric, a spokesman for UN Secretary-General Antonio Guterres, told a briefing on Monday that all parties should “avoid” any actions that could lead to miscalculation or further escalation of the already devastating conflict.